Do you ever stumble on fabric that feels like it’s yours even before you get to the checkout? Like you would maybe snarl at someone who even looked at the bolt while you were hugging it desperately to your chest, a half-mad and possessive gleam in your eye? I spotted her in Mood last year; I was almost out the door when she waved a little abstract geometric arm at me. If fabric had eyelashes, hers would have been batting. A lovely textured cotton with a deconstructed modernist tree print, she was in my arms within seconds.

Obviously a dress like this needs an occasion. One of my closest friends had a gorgeous farm wedding this summer, and the combo of Sophia + fabric seemed like the right blend of fancy and casual. Of course there is no rest for the sewing blogger’s boyfriend; I dragged Guillaume outside in between courses so we could snap these shots before the sun went down. Unsung hero, he. 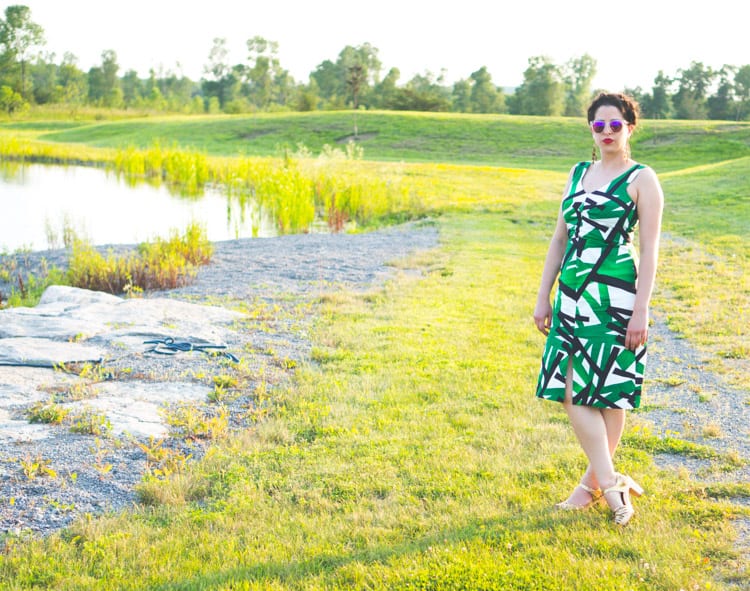 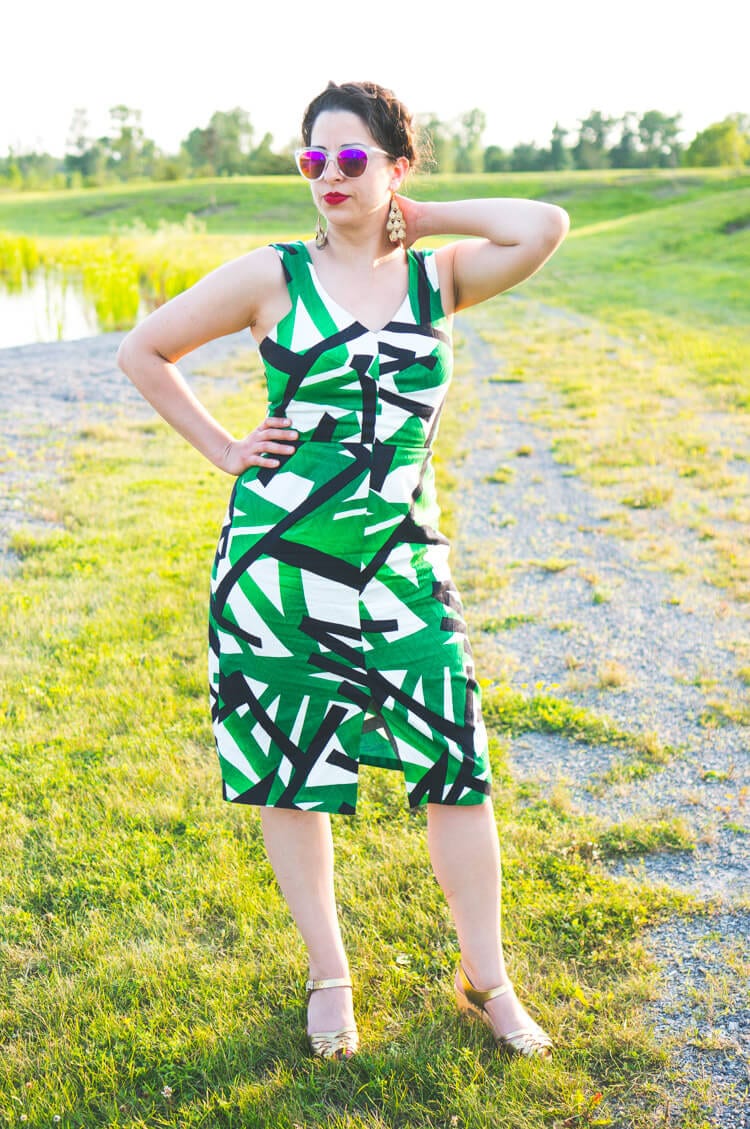 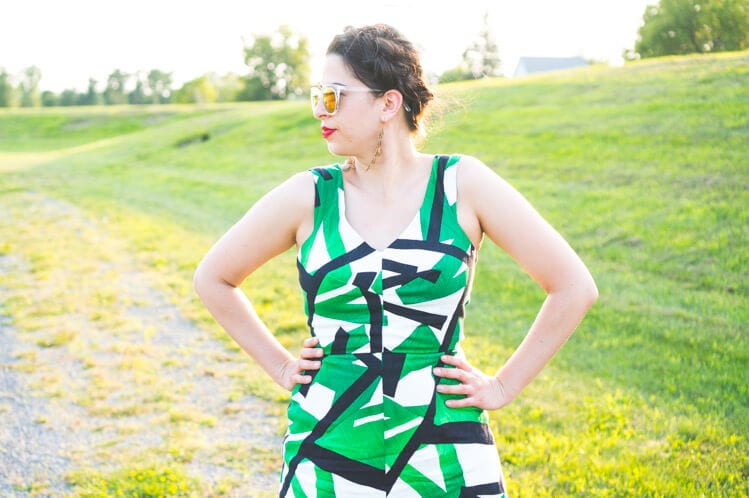 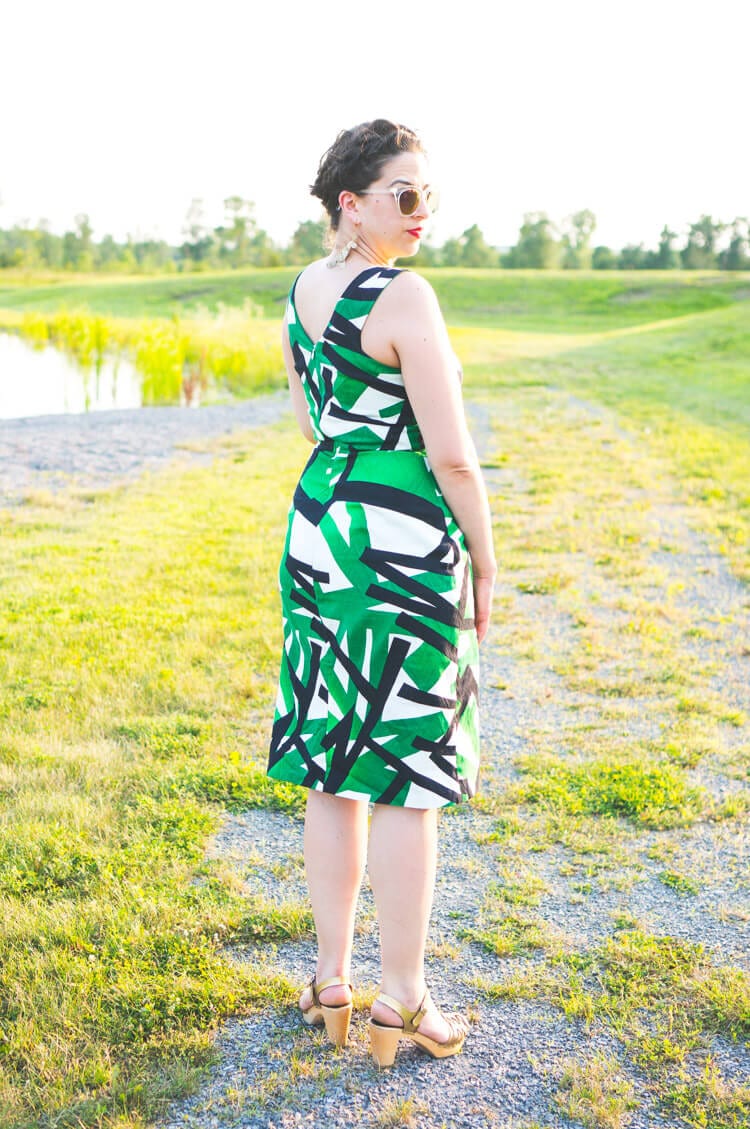 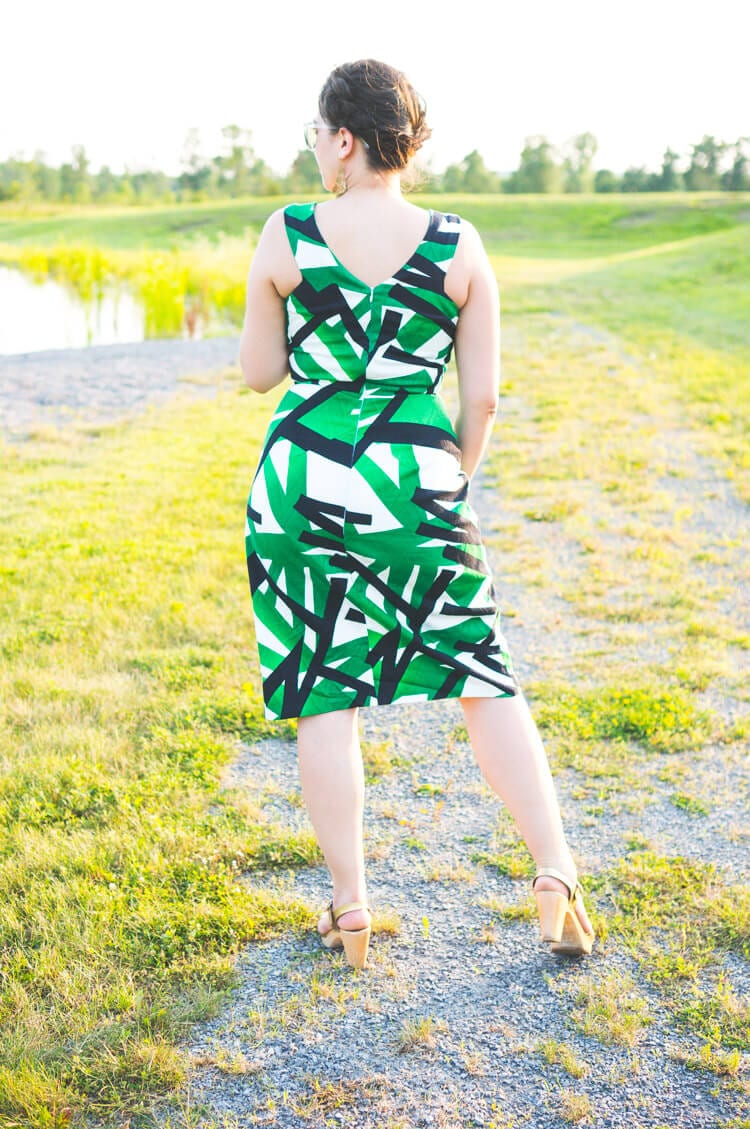 I really, really love the design lines of the second variation of this dress pattern. The silhouette is a classic sheath but the angled straps, diagonal darts and centre slit feel cool and modern. The bust darts create a pointy, space age shape that felt really fresh. I skipped a muslin since BHL has always fit me quite well out of the box, but I probably could have used one this time around. I’ve put on about 10 pounds since my last BHL make (I *may* have been carbo loading after quitting smoking/vaping this spring) and have gone up a size in the hips (never, ever in the boobs, which would really make a me a lot less cranky about the fact that most of my clothes are too tight these days), so instead of making a standard 10US like I normally do, I graded to the 12US at the hip. However, there was still very little ease, as I discovered to my discernation during the wedding. After the ceremony my stomach really started hurting and I realized it was because the waist of the dress was essentially cutting off communication between my upper and lower body. I could only sit down and eat dinner at the same time if my dress was COMPLETELY unzipped. The only thing worse than taking off your heels in lieu of flip flops on a wedding dance floor is being the weirdo who walks around with your dress completely undone all night. I was that weirdo. Thank god for jean jackets. 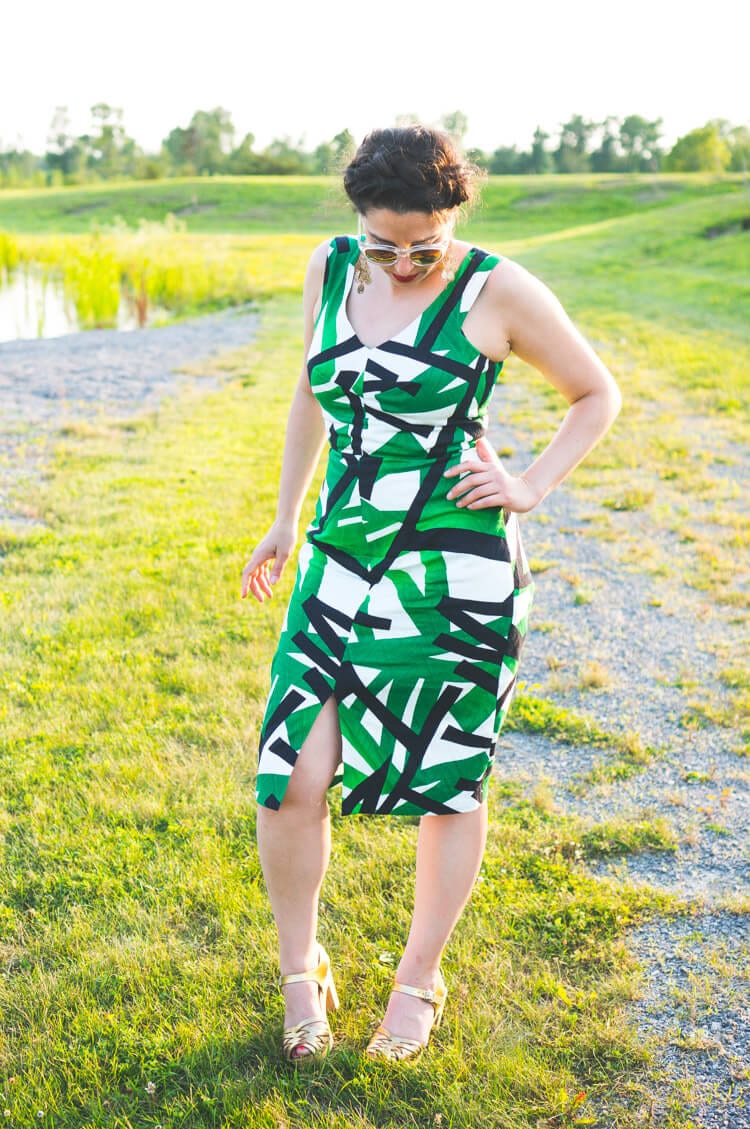 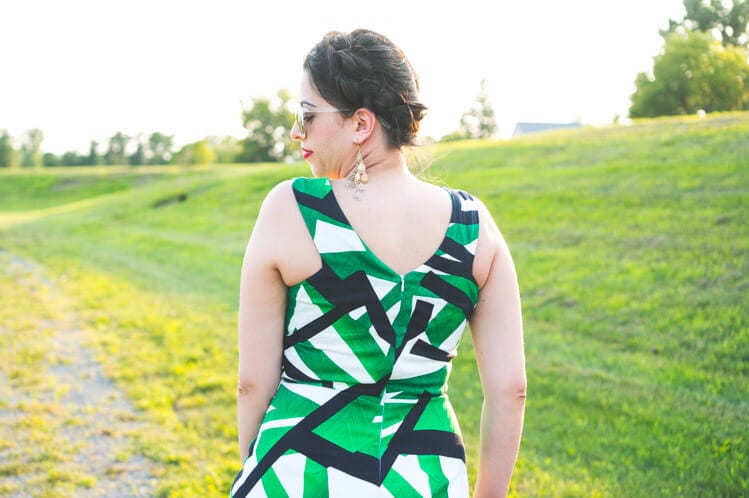 While I was (over) fitting the dress, I noticed major swayback after I installed the zipper – I could pinch out more than an inch at the small of my back. I’ve never had to make a swayback adjustment before and I had to rip out the zipper two times before I managed to get it laying somewhat flat. I ended up taking out at least an inch at center back, grading to nothing at the side seams. I think part of the perceived swayback was a result of the dress being too tight to begin with. I think if I had had a little more ease at the waist it would have been less of an issue. I’m still not really sure why I didn’t realize how tight it was when I was making it; I must have been bloated at the wedding. Champagne, happy tears, humidity and way too much food will do that to ya. It’s a good reminder to actually bend over and move around while you’re fitting to make sure it’s comfortable when you’re doing more than standing up straight.

Since the construction of this dress was relatively simple, I decided to go full hog on the guts. I always get all longy eyed and watery mouthed when I see the innards of an Oona or Leisa make. Taking that kind of care with something only you see is like sewing a love letter to yourself. My love letter started, “Dear Heather, you deserve some silk”. Miracle of miracles, I still had a scant yard of the washed silk I had used for my Carolyn pajama samples in almost the exact shade of kelly green. I lined the bodice with it, with just enough left over to squeak out about 6 yards of double fold bias tape for the skirt seams, made using my Clover 1/2″ bias tape maker. Rather than just sandwich the exposed seams in the folded tape, I actually sewed each seam twice; once from the wrong side to catch the raw edge of the tape, and then from the right side of the seam to close it all up. It might have been overkill but it was a good excuse to practice my sewing precision. 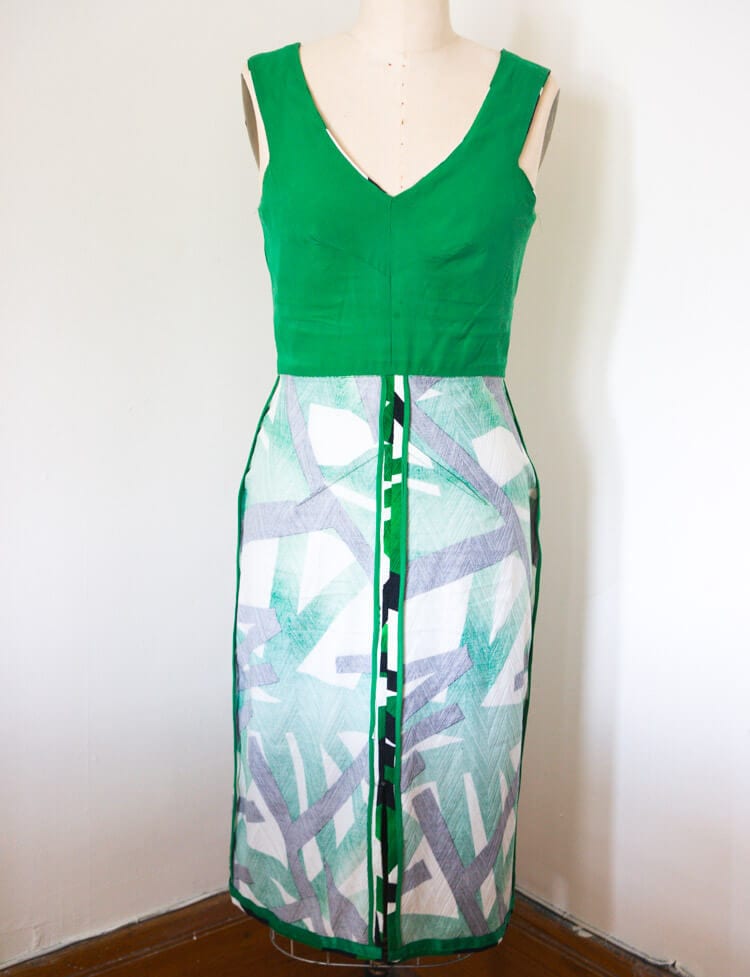 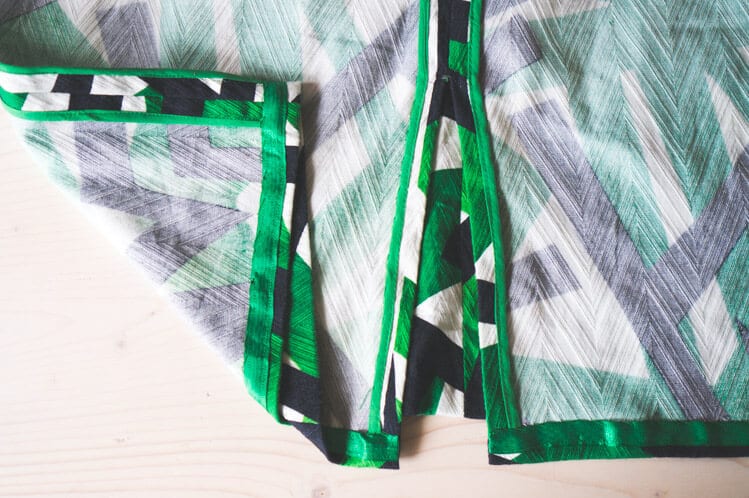 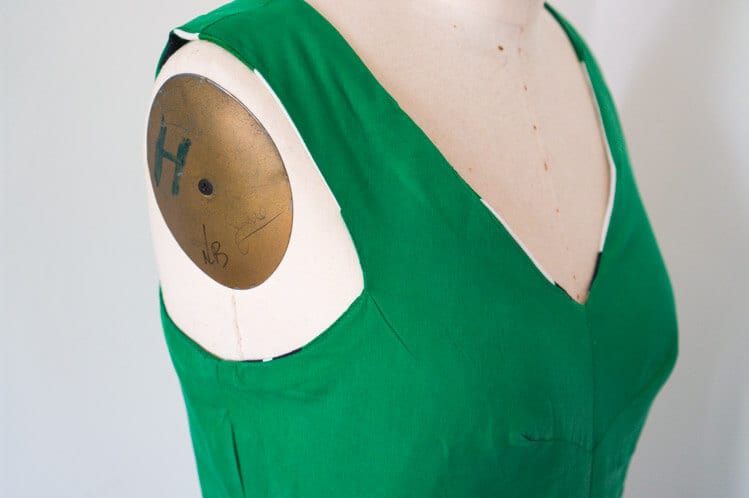 The pattern instructions don’t call for any under-stitching but I did what I could to prevent the lining from peaking up at the V and under the arms. I also somehow had the perfect match of seam tape in my stash, so I used that to finish the hem, catch stitching it into place. I also tacked the center slit seams into place with a slip stitch rather than topstitching them down. Finally, I sewed a tiny bar tack at the top of the slit to strengthen the seam at the point of stress. As for the print, I didn’t bother with print matching. I didn’t have that much fabric to work with, and I quite liked how the seam lines broke up and highlighted the angular abstract print even more.

Extreme issues of dress tightness aside (which I’m hoping will be made moot by my new M-W-F morning swim routine), I really do love this dress. I haven’t had that many excuses lately to go all out on a party dress and it felt good to make something frivolous and beautiful, with laboured over insides that said “you’re worth it, baby”.

Have you sewed a love letter to yourself lately? Did that love letter fit better than this one? 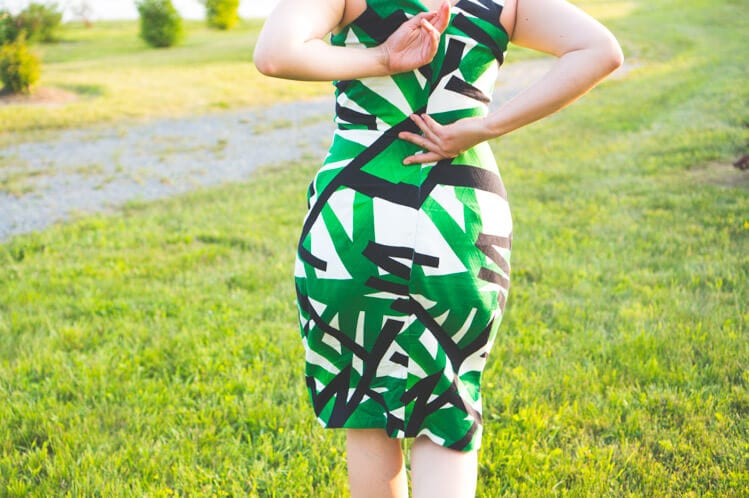 ps. The ladies at BHL told me Sophia hasn’t been formatted for PDF yet, but they should be adding a sign up sheet to the product listing if you’d like to be informed when they do.

pps. BHL gave me this pattern back when it was released. All opinions are my own.

BY HAND LONDON FLORA – AS A SKIRT!