THE ROSCOE DRESS BY TRUE BIAS IN PRINTED SILK

Last post for 2015! And it might be one of my favourite makes this year…. I think I actually clapped out loud when I saw the Roscoe Dress that True Bias released this fall. It so perfectly captured the proportion and style I’ve been after lately. Anyone else reveling in the 70s revival happening right now? GIVE ME ALL THE PEASANT TOPS, SUEDE AND FLARES PLEASE.

I was super excited to get cracking on it, so it was convenient that my step-sister was getting married. Like most makers with an occasion (erm, excuse), I wanted a new dress; my sequin shift dress has got a lot of “fancy” wear and it was time for an update. 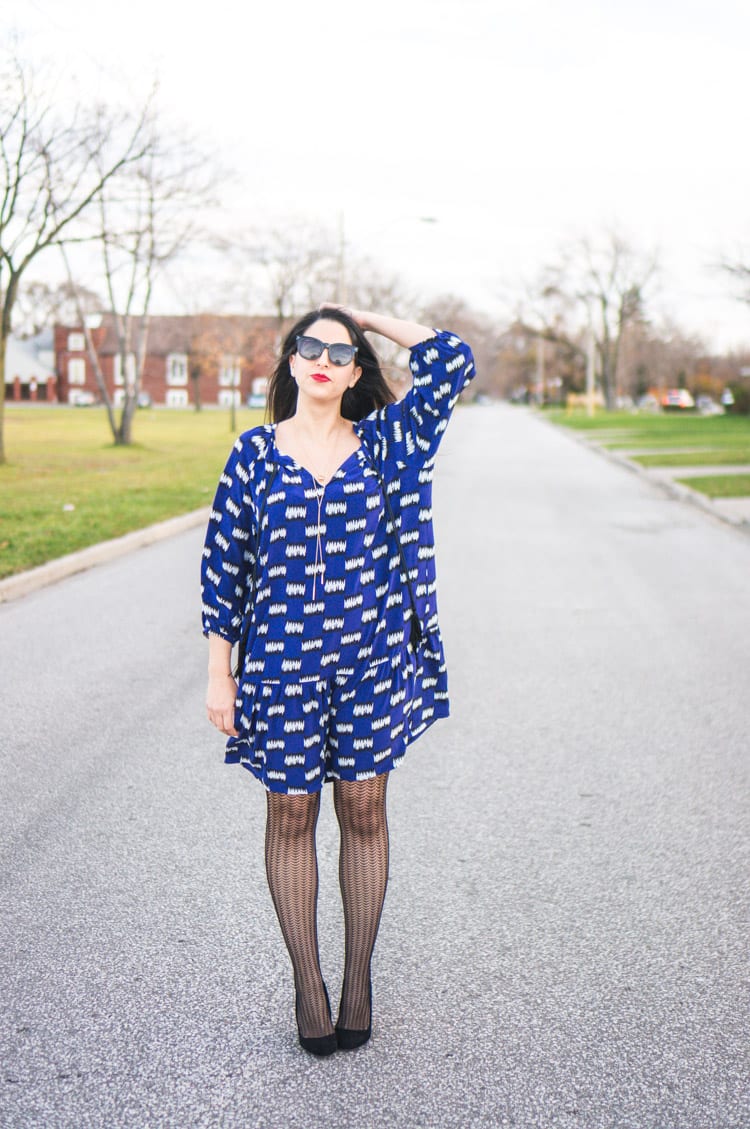 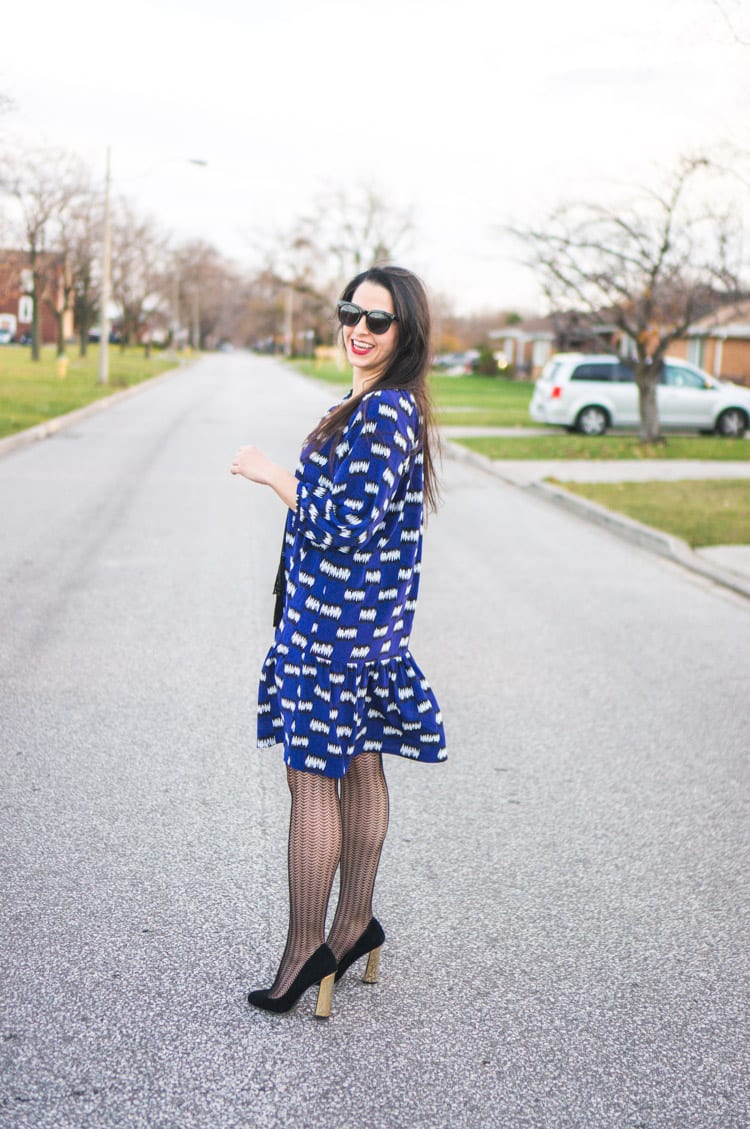 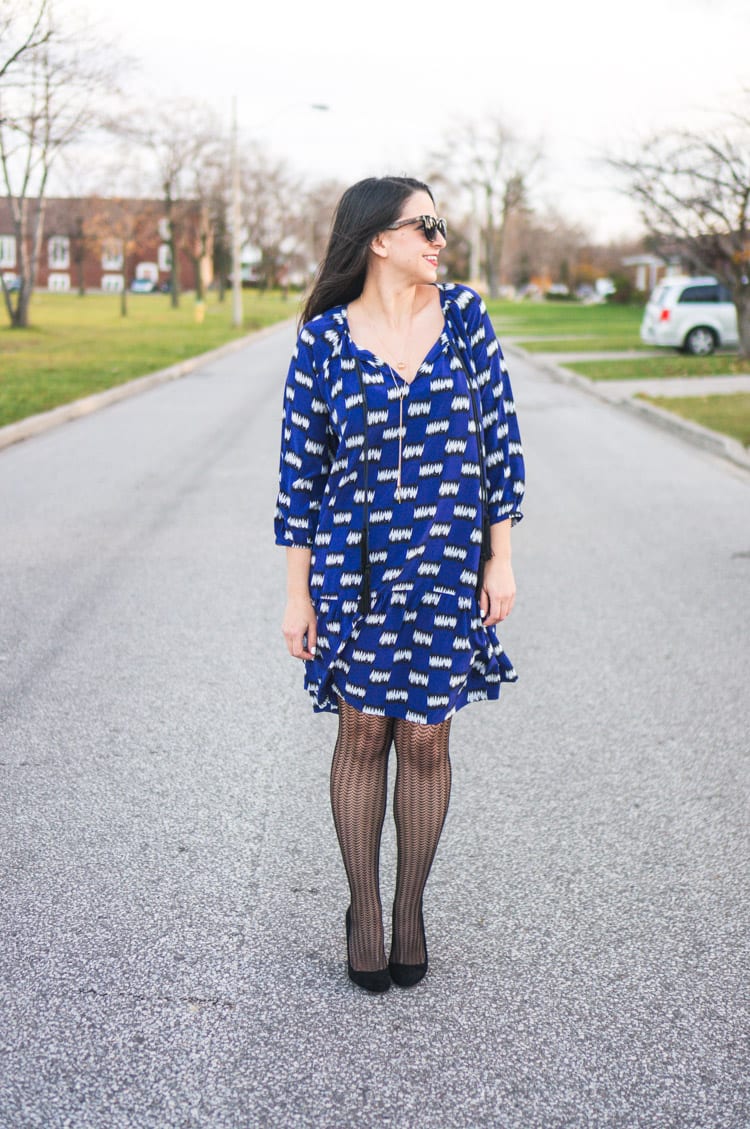 While the silhouette is loose and billowy, with the right stockings, heels and jewelry, I think it makes a great statement; there is something refreshing about an “evening” look that isn’t super tight and fitted, don’t you think? Even casual shapes look elevated when you make them with silk.

Speaking of… while I was in NYC this fall for Camp Workroom Social (which, incidentally is opening registration for 2016 very soon), I was on the lookout for a Roscoe appropropriate silk crepe de chine. I wanted something bold and modern to counter the sweet peasant-vibe of Roscoe, and was elated to stumble on this crazy purple, black and white print, which kind of reminds me of  a cartoon monster’s gaping maw. I walked around Mood clutching it protectively to my chest, only to have a near psychological meltdown when I realised there were only two yards left on the bolt. Thankfully I managed to find another roll hiding out and the day was saved. It felt familiar to me and only later realised Jenny had used it for her Southport dress. Great minds, etc. 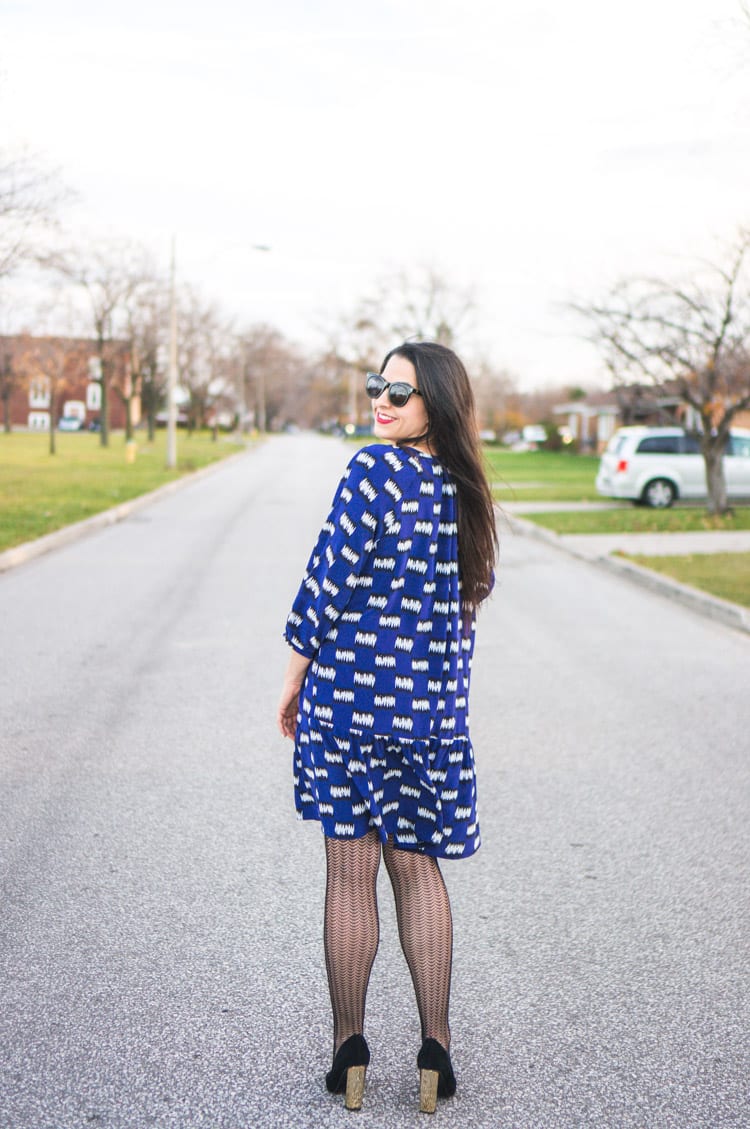 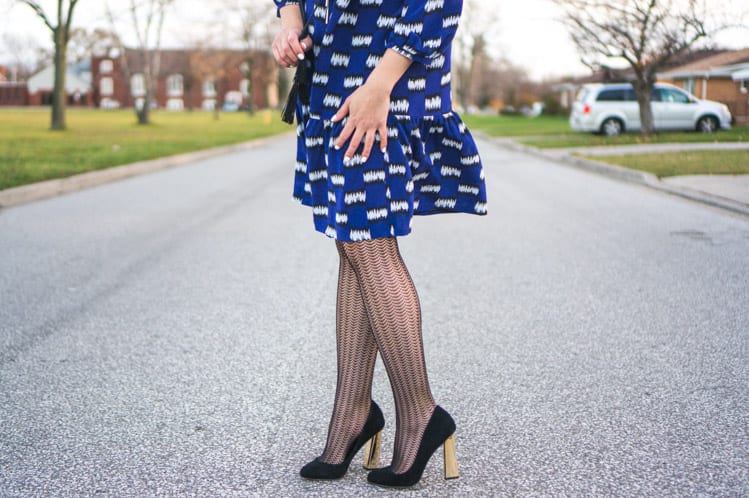 Construction of this went fairly smoothly. If you’ve never worked with silk before, start with crepe de chine. The pieces “cling” together, making it less slippery and easier to work with than say, charmeuse. The instructions for the pattern are great, as per usual with Kelli, and I french seamed pretty much everything except for the gathered hip panel which just got the ol’ serge treatment.

Oy, speaking of gathering? SO MUCH in this pattern: sleeves, hem AND collar. I realised as I was working on it that it’s probably one of my least favourite sewing tasks, all those damn parallel lines of basting stitches you have to methodically tug and manipulate into shape. Heaven forbid you pull on the wrong side of the fabric and then find they won’t budge, or one of the threads break. I’ve yet to be happy with my gathering but sometimes you just need to let go and breathe through it. 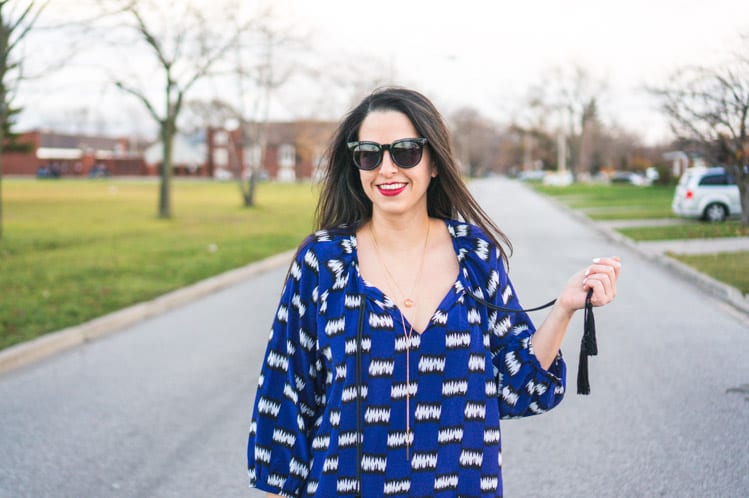 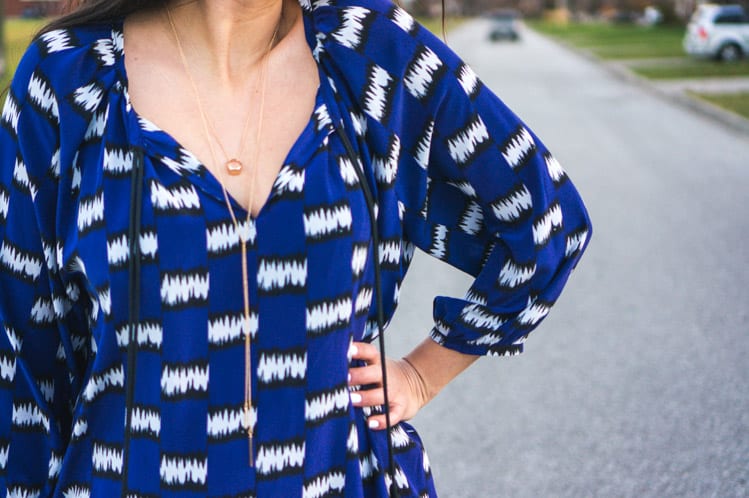 Speaking of collars, I love the neckline on this. So soft and pretty and hits at juuuust the right place for me . The only real change I made to the pattern was to skip the fabric ties for something a little more special. I have been fixated on this denim tassel tunic thing from H&M ever since I saw a girl wearing it on the metro and breathlessly ran after her to plead about its origins. I had tassels on the brain ever after, and plotted to add them to Roscoe. 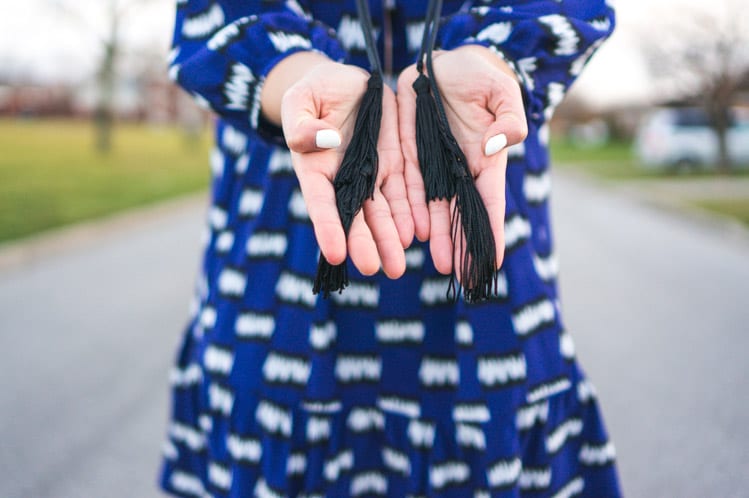 The tassels had little loops on them which I painstakingly wrapped around  some matching black cord and then handstitched into place while binge watching Fargo. I then inserted the cord ends inside the neckline band in lieu of the ties. I was worried they’d be too heavy and weigh the dress down, but I was surprisingly pleased with how they worked, despite being so dark they pretty much blended into the dress. More excuses to strike ridiculous tassel highlighting poses outside your dad’s house while people drive past to get to the nearby Tim Horton’s, no? 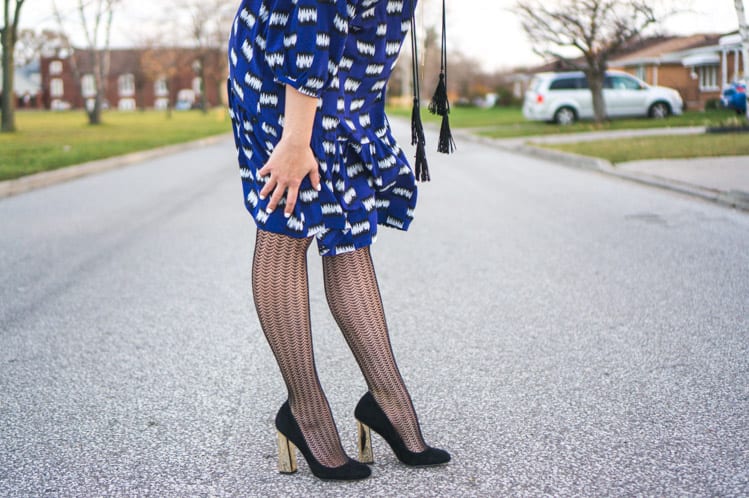 I’m packing today for France and this lady will be coming with, either as my New Years dress or just to wear with black tights and boots while I’m exploring the little northern city I’ll be staying in while I wait for G to finish up work. Thankfully, crepe de chine doesn’t wrinkle terribly in a suitcase. 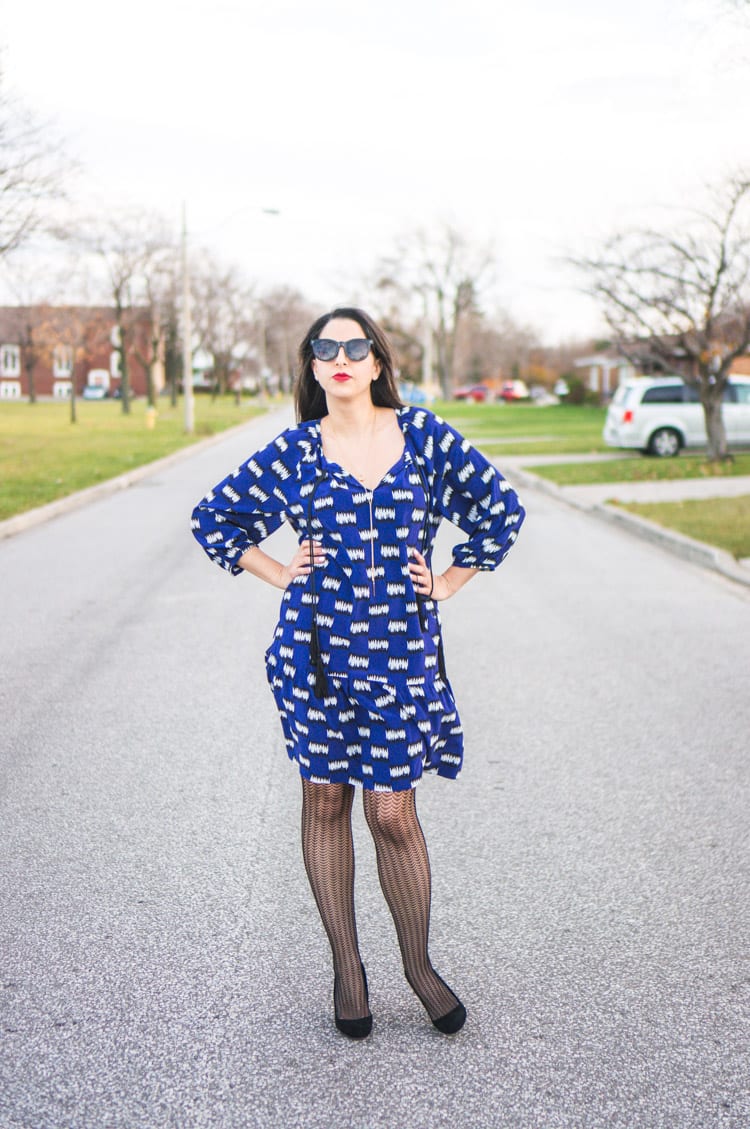 So, what do you think of this peasant-y shape? Have you made a Roscoe yet or is the current 70’s revival  not hitting you in the sewing sweet spot?

ps. A big thank you to my brother for taking these pictures. He helped me shoot a bunch of fall makes while we were home and did an awesome job, despite laughing at me for my now automatic snap-pose-snap-change pose-snap routine.

pps. Kelli gave me this pattern since we generally share our new releases with each other, but as per usual, I love it unconditionally.