It’s been a crazy year, and if I’ve been a little cagey about what I’ve been up to, it’s just my tendency to plan for the worst, and not wanting to talk about things until they are locked down tighter than maximum security after a prison riot. But… I think it’s finally safe to say that Closet Case printed patterns are about to become a reality. Unless I decide to scrap the whole plan and make a REALLY big box fort in my apartment.

This development has been a long time coming and something I’ve wrestled with over the last year or so. The reality is that paper patterns mean inventory, storage, staff, dealing with delivery services…. It’s much easier making digital products that exist in the ether and require little to no overhead to manage. But just because something is easy, doesn’t necessarily make it the the right move. In my survey earlier this year, most of you told me loud and clear that you preferred printed patterns, and as I meditated on what I wanted to do with my growing business, in my gut I knew it was the next logical step. Since then, I’ve spent the year researching, organizing and planning to bring printed patterns to you. As is always the case with big shifts like this, it took much longer than I anticipated. A June debut got pushed back to September, which got pushed back to November, due to all the million little things that go wrong and need to be dealt with when you’re dealing with a printed, forever product with no take-backs. 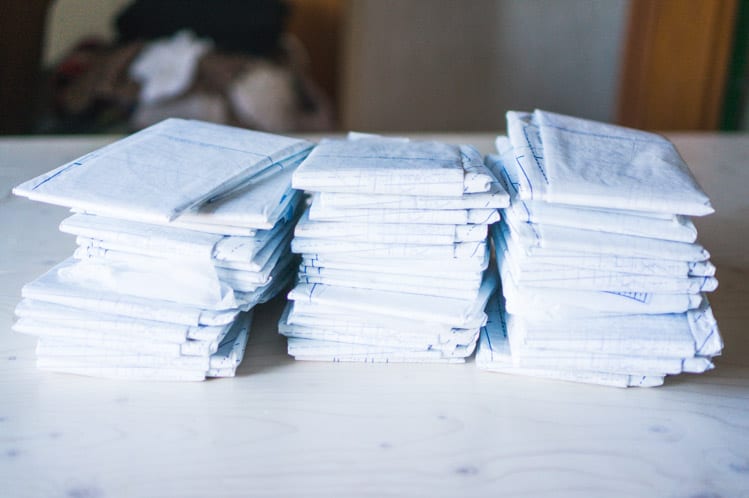 It’s been alternately terrifying (business loans are no joke), challenging, and unexpectedly fun. It meant reworking the back catalog so that everything was flawless once those tissue sheets got printed, developing packaging and illustrations (which I’ll be talking about later this week), reformatting all the existing instructions and graphics, all while developing a new coat pattern that turned out to be my most personally demanding yet. But it was worth it. Right now I have 14 boxes of  folded pattern tissue hanging out in my living room and I 100% cried when I opened them for the first time and saw actual tangible, physical proof of all the work I’ve done this year.

So what’s being printed? Since I was on a budget, I couldn’t go whole hog with the entire catalog, especially since Sallie and the Bombshell aren’t quite seasonal at the moment. However,  Nettie, Ginger and Carolyn will all be available in print format, along with Clare, my very chic new winter coat pattern. I am still waiting for the envelopes and booklets from my printer, and after a few epic days of stuffing this weekend, we hope to have them available for sale on Monday. I say “we” because I finally have a little help around here; Roxanne is my awesome part-time assistant and she will be taking care of customer service and order fulfillment from now on. I’ll have to give you a better introduction later because she has made my life so much easier.

One of the biggest worries for me going forward was affordable order fulfillment. Since I live in Canada, I spent a lot of time thinking about how to make shipping as affordable as possible for my customers since the vast majority of you live in the US and around the world. I think I came up with a great compromise. Fear not Americans! Everything you order from my shop will be mailed from within the United States using the United States Postal Service; I have hired an army of drones to take your packages across the border! Well, more like a legit courier company who ships out for me twice a week. What this means is that shipping will be comparable to other US based pattern companies.The courier fee is worked into the overall price, but overall it is substantially less expensive and much faster than using Canada Post, and there is no worry when it comes to customs fees.

For my international customers, I will be shipping using Canada Post since our international shipping rates are actually much better than the US (along with our maple syrup, but let’s not get political). As for my fellow Canucks, obviously I will be shipping via Canada Post. Now that Justin struck down that community mailbox thing, you won’t even have to walk far to get them (apologies for a totally topical in-joke about Canadian bureaucracy).

If you own a retail brick and mortar or online store and would like to carry Closet Case patterns, we are also ready for wholesale. We won’t be shipping out until next week, but you can apply to have your account set-up now by filling visiting this page and filling out our wholesaler form (be sure to read our wholesaler terms while you’re there).

I’ll be back later this week to talk about the new packaging and illustrations of my patterns since that was a pretty epic journey on its own… and hopefully by this time next week I’ll be ready to start shipping printed patterns straight to you!

SEW SO SO GRATEFUL!