If you’ve been sewing for a while, or even if you haven’t, you know that a good iron is almost as important as the actual sewing machine. A garment lives and dies through good pressing; pointy darts are smoothed out, wonky bits can be corrected with the right touch, and enough steam helps shape and mold everything from lapels to princess seams.

I’ve gone through a dispiriting amount of irons over the past few years. Nothing gets my blood boiling faster than the planned obsolescence and junky plastic manufacturing that dominates almost everything we buy nowadays. Every time an iron conked out on me, I was tempted to bury it in the backyard and have some kind of dramatic “WHY GOD WHY” screaming fit at the sky (I will not mention how many internet routers I have sent to appliance heaven either, but I’m pretty convinced those things have a self destruct mechanism that kicks in after 6 months).

To be totally fair, my last iron, a medium price Rowenta, kicked the bucket because my cat is an a-hole and my nephew is a toddler. Zola knocked it over the first time in one of his “Watch me ruin this, just WATCH ME” moments, and Dylan, bless his grubby little crawling ways, pulled the cord the last time he was over. Clearly the iron was off the second time or I’d be writing an entirely different post about what to do when you family stops returning your phone calls because you burned their beloved grandson/nephew/son.

Needless to say, the Rowenta was my third iron in as many years and even before it’s lethal tumbles, it kinda sucked. It leaked and spit and I was never very happy with the steam output. Internet to the rescue; I wrote a post last month asking for iron advice and you guys totally delivered. At the time I was torn about whether or not to continue with domestic irons, or whether to brave the sort of scary realm of gravity feeds. Just the name alone is a little intimidating; it’s going to feed gravity? WHERE?!

After a butt-ton of research helped a lot by your comments, I came up with a few options. I’ve read hundreds of reviews because I am a weird consumer nerd who enjoys reading amazon one star ratings, so I thought I’d share what I learned in case anyone else has recently buried an iron in the backyard or is close to throwing their iron out the window in impotent, steam-less rage.

These are, of course, what most of us start using. They range in price from the $15 Target specials to $150 plus Rowentas and Reliables. Here’s the thing about those pricey ones – their shelf life seems to be about the same as the cheap-os, at least from what I’ve heard. You’re paying for more steam or heat, but the price is not a guarantee that’s going to last longer than a Black & Decker. My thinking is, if you’re going to go domestic, choose something well reviewed that doesn’t cost more than $50 or $60 – that way when it dies, the way they ALWAYS do, you haven’t invested a ton of money in it. Here are the two that looked the most promising in my research. 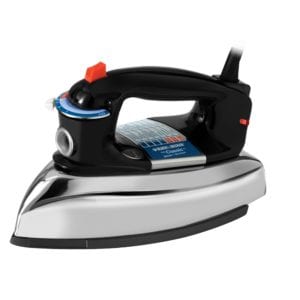 How FREAKING CUTE IS THIS?? And thank you to Crab&Bee for hipping me to this retro goodness. This is the Black & Decker Classic

and I want to marry it and have little short pants, bow-tie wearing babies with it. And sweet mercy is it affordable – under $25 on Amazon! Its got a small water reservoir, but its apparently nice and heavy and has a nice heft which really helps with the wrinkles. I’ve read it’s also very sturdy and can stand being knocked over since it’s not all plastic garbage. I came very close to pulling the trigger on this one but ended up going another route. I’m still tempted to get one as a backup. Or just display it somewhere in my house. 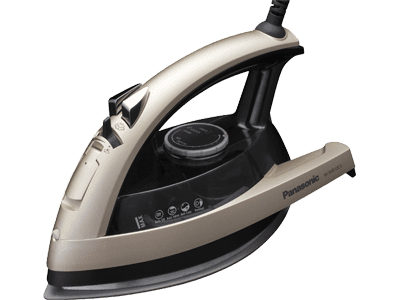 This is another reader suggestion from Niki and the reviews were also good. The Panasonic NI-W810CS intrigued me because the plate is slightly rounded which makes it glide really easily over fabric. It also makes great steam, and Niki said it was a real work horse in the atelier she worked at.

Both of these irons have auto shut-off. I know that drives a lot of you batty but if you’re memory impaired like I am, it’s probably a good thing.

On to the scary. But really, they aren’t that bad. I can now speak from experience because after a lot of hemming and hawing I pulled the trigger and got one. Here’s the deal with these dudes; they are awesome. There is no auto shut-off so you can iron all day and not have to jiggle the handle constantly. If you’re terrified of burning your house down, readers had a few suggestions. Lauren plugs hers into the same outlet as a little light – that way she has a visual reminder it’s still on. Lizzie plugs her iron into a master/slave board, which is basically the most amazing thing I’ve ever heard. Besides the fact that you get to experiment with some light electronic BDSM, this means that you have a light or your sewing machine or whatever that acts as “the master”. When the master is large and in charge, the iron works. When the master needs to pick up new whips or get groceries or whatever, the rest of the slaves go to sleep. Problem solved.

It’s called a gravity feed because your water tank is independent from the iron. It needs to be hung a few feet above your pressing station and the wonderful force that is gravity pulls the water into it. There are a few ways to suspend it. If you have a fixed sewing space, you can hang it from a hook in the ceiling like I did. Alternatively, you can mount it to an IV stand and wheel it around like a sickly invalid. I’ve been using mine for weeks and still haven’t had to add water to the tank, which makes me very happy. You do need to add mineralizer to the water every few months unless you are using distilled water, since the deposits in tap water can build up and cause problems. I think it’s important to hang it high enough that you don’t have the hose in your way, because you can melt it if you touch it with the hot plate. Most come with little clips to attach the hose to the wire which helps keep it out of the way. It took me a little while to get the hang of using it but I’m a gravity feeder for life now. 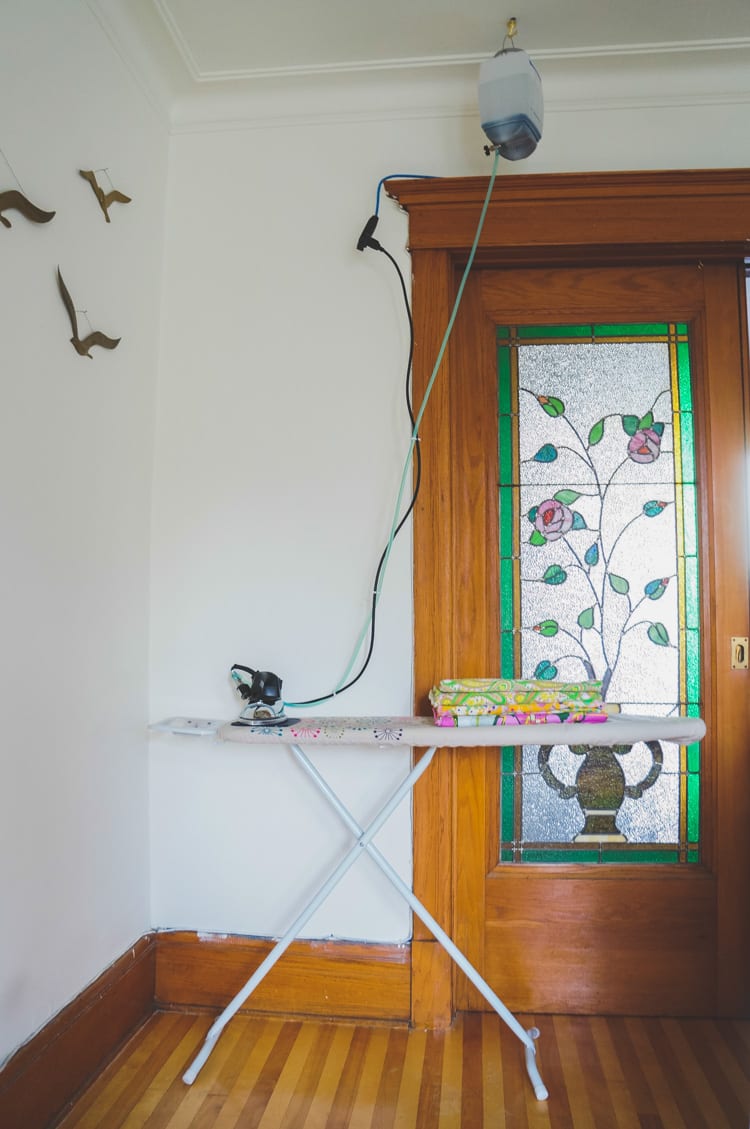 I have my iron plugged into an extension cord that runs over my door and into a power bar. Be aware that most gravity feeds have fairly short cords, so this is probably a necessity. Extension cords can be dangerous so make sure you’re using one that is designed for the load. I have just enough length to iron comfortably across the entire board, but I can’t really move around more than this. 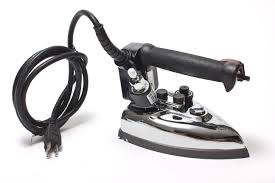 This is the model I ended up going with after heeding the wise voices of Jenny and Lauren: the Silver star ES-90

. Less than the cost of a Rowenta or Reliable at around $110, but guaranteed to last. The seller I purchased it from on Amazon doesn’t seem to have any more in stock, but the great thing about the one I bought is that it included the mineraliser and a teflon shoe, which really helps modulate the heat and prevent scorching. If you’re going to buy it online, I suggest getting in touch with the retailer to make sure that is the case, because it’s a little extra if those things aren’t included. I love this little guy! It kicks out so much steam I can use it to steam stuff on my dressform (I actually steamed something on myself yesterday and am really happy to report I did not get 2nd degree burns). It also came with a silicone pad so i feel okay about leaving it sitting on it all day, and have not once forgot to turn it off. Good habits people. We can make them. 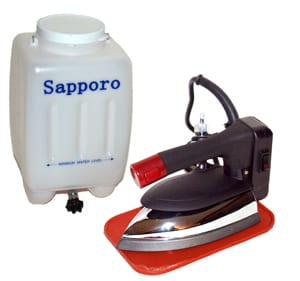 is another popular model. The guy at my tailoring supplies store tells me its the popular “student” model. Jen at Grainline said it’s what she used in school. Again, not crazy expensive at around $100. There were some big thumbs up in the comments section for this model, but I don’t think it comes with anything besides the silicone mat.

There are also some more professional options for those with slightly bigger budgets. The Naomoto HYS 58

is almost $500 but if you like Cadillacs, this might be your girl. I’m also intrigued by the steam generator models. They are basically a compact gravity feed with huge built-in tanks that don’t require suspension, like this cool looking DeLonghi

Whew. Who knew i had so much to say about irons! Hope this helps some people out. If I missed anything or you have another suggestion, leave it in the comments. I like hearing about irons that work. Warms the heart, err, literally.

Our Pressing Station & the Best Iron for Serious Sewing