Hello everyone and Happy Halloween(ish)! As those of you who saw my Halloween posts last year know, I am crazy for this holiday. I would say it was my Christmas, if Christmas wasn’t also my Christmas. Montreal takes getting dressed up in ridiculous costumes VERY seriously and there is nothing I love more than being crammed in a tiny bar with giant cactuses, Walter Whites and Party Robots.

I’m still recovering from the weekend (so much dancing –  I’m starting to feel my age) but I thought I’d share my costume with you this year. I debated for a few weeks about what I should be. I didn’t have the energy to do a repeat of last year’s epic monthlong costume-making extravaganza and was aiming for something thriftable, low budget and with minimal sewing.

In serious contention was Anne of Green Gables (I just thought such a sweet and wholesome costume would look HILARIOUS next to a sexy nurse/cat/dinosaur), Stevie Nicks & Lindsey Buckingham OR Lucille & Buster Bluth (both kiboshed because my Lindsey/Buster didn’t feel like going out), Jerry Blank, Little Edie from Grey Gardens or…. Karl Lagerfeld.

It ended up deciding itself as I already had most of the components and also… I love this weirdo. Such a polarizing, iconoclastic figure, he exemplifies all that is sort of wrong and kind of fabulous about the fashion industry. He’s an icon. And icons make very good Halloween costumes. (Please check out the documentary Lagerfeld Confidential. The man is an enigma wrapped in a tuxedo wrapped in a sound bite).

I call it “Karl Dragerfeld”.

I already had a black jacket with a tailcoat, skinny black pants and black ankle boots. I picked up a high-collared blouse (SCORE!) at a thrift store and got the crucifex, fingerless gloves and sunglasses at a costume place and the dollar store. I made a cravat out of some drapey black fabric from my stash. All told I think I spent $25.

I teased my hair into a dandy ponytail and coated it with some pretty heinous white spray. It didn’t look 100% white but I didn’t feel like buying a wig. I did a crazy smoky eye (wearing sunglasses at night, while very Cory Hart,  is not very conducive to conversation) and a nude lip. Threw on a military overcoat and a gold fan and just tried to look as stern, starved and fierce as possible.

Unfortunately I didn’t get that many photos. Here is one of me and my friend Mike dressed up as Alien/James Franco from Spring Breakers (he actually got his hair cornrowed!!!!) 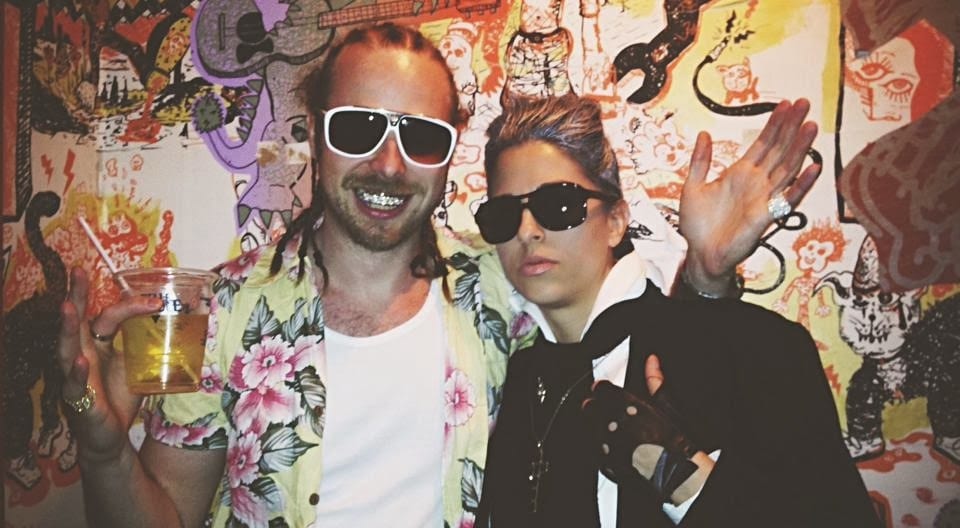 It was a very fun night, until some crazy person stole my dollar store glasses, but I managed to dance it off. Washing all the white out of my hair was another matter entirely!

What are you dressing up as this year?