So we finally arrive at last year’s triple header Halloween extravaganza (I just heard RuPaul say that in my head – too much Drag Race for this lady. Which by the way YOU HAVE TO WATCH WHY ARE YOU NOT WATCHING IT RIGHT NOW GO WATCH IT. It’s Project Runway with drag queens. Seriously, quit your plans tonight and go watch the first season on Netflix).

So last year. Right. I wore 3 costumes which is excessive, even for me. The cutest one was this guy: 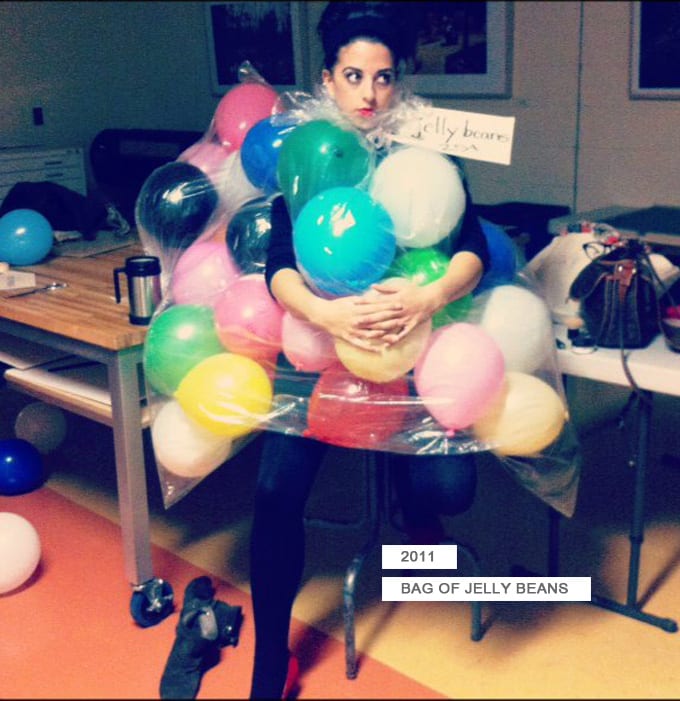 The story behind this is hilarious even though it didn’t involve me going out anywhere. My friend Chris wanted to shoot a “Walk of Shame” calender for his final photography project at school. I demanded to be Ms. October because I’ve declared for years that the worst/best/most epic Walk of Shame is the day after Halloween when you have all these haggard zombies, disheveled superheroes and slutty bunnies trying to get home after hooking up the night before. Every year I am regretfully too hungover to get brunch on a busy street, sit at the window and laugh at everyone trying to get home with as much dignity as they can muster while trying to hold their now ragged costumes together.

So the idea for this shoot was that I would be trying to hail a cab at dawn in this AMAZING jelly bean costume. Chris’ girlfriend made it by stuffing a clear plastic bag with blown up balloons, cutting two holes in the bag for my legs and tying the opening shut around my neck. Chris hired a makeup/hair stylist who came to my house the night before and put on a Drag Race amount of product on my hair and face, the idea being that I would sleep on it to get that authentic bedhead, walk of shame patina. We ended up taking pictures of me trying to hail a cab at 7am on a busy street while people driving by lost their shit laughing at me. Good times. Unfortunately the Walk of Shame project never totally came together, so the only evidence I have is this iphone pic taken shortly before hitting the streets.

I never wore this to a party but I think it’s old school and charming and would be perfect for a last minute costume. 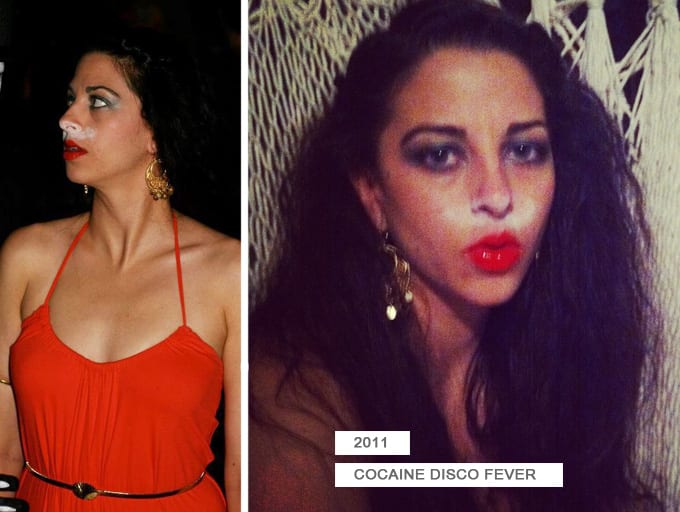 The second costume of 2011 was a quick thing I threw together for a disco night my friend was DJing. I basically wanted to go as Bianca Jagger in full Studio 54 cocaine fever so I tossed on this coral jersey dress (the first dress I ever made, from on an old 70’s pattern). I couldn’t find a crimper so I slept on tiny braids over night, took them out and then teased up my hair as big as it would get. Slathered on some glittery, glossy 70’s makeup, and lots of gold jewelry. For the final touch, I coated my nose region with lots of corn starch for that “I could Hustle allll night” vibe (which I incidentally carried around all night in a ziploc bag and would touch up in the bathroom. Brings a whole new meaning to “powdering my nose”!) Less ambitious then most of my costumes but still a fun, easy idea.

Now. For my favouritest, most epic costume of all time…. I present you with….. PRINCE. 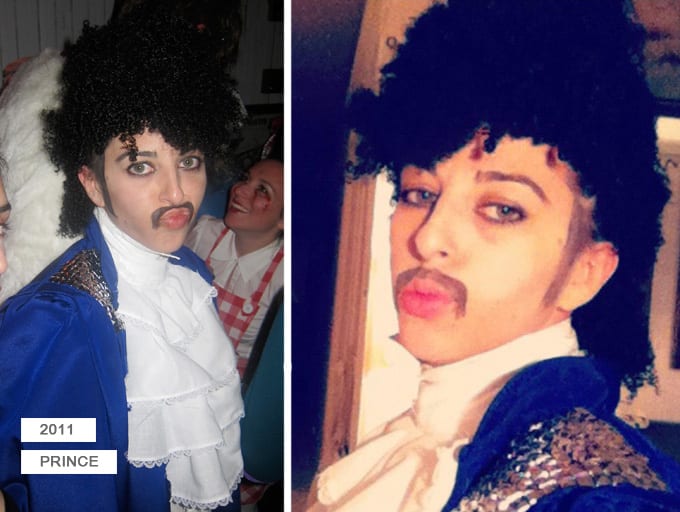 I know right? My boyfriend got SO creeped up when I showed up at his house. “You look too much like him. It’s making me feel really weird”.

This costume came about in June of last year. I had the absolutely life-changing opportunity to see Prince play live in a pretty small venue. He played for THREE HOURS. He did EIGHT ENCORES. The best show I have ever/will ever see. That man does NOT f*ck around. I watched Purple Rain pretty soon after and was like, yep, me, Prince, it’s happening.

So I started hunting for a purple blazer. Strangely, I found one. I bought a bag of studs and spent a  few evenings piercing the shoulders of the jacket (and my fingers). I also thrifted a pirate-y blouse, to which I added a ruffly multi-tiered cravat/neck piece thing I made from some cotton & lace trim. I bought an afro wig and cut it into a jerri curl (that was the funnest part). I painted on some sideburns and mustache using black eyeliner. I added some dark eye make-up because, come on, it’s Prince. I wore some black skinny jeans and black pumps, because Prince wears heels too. Just before leaving the house, I watched the Dave Chapelle sketch where Prince beats Charlie Murphy’s ass at basketball. This was really key to getting into character.

This was one of those costumes where no one recognizes you and then freak out when they do. And for the first time ever, I won first prize at a costume competition. Maybe my proudest moment ever (sadly). And I still have this purple blazer hanging in my closet…. Is there anything more lonely and abandoned than an old Halloween costume???

Now, onto this year’s costume…. It seems I was being too vague and coy about what it’s going to be. Maybe you need a photographic hint? Here’s what I’ve been working on for the last week. My living room is currently covered in fake diamonds and pearls (no, it’s not another Prince costume). 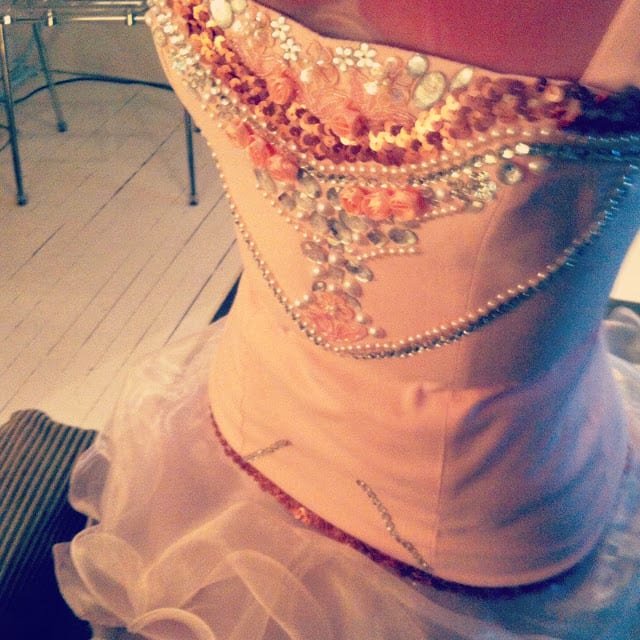 One of you came kind of close to guessing last weekend…. it IS based on a TV show (itself based on a fringe American subculture), one that has been on for a few years now. A show that terrifies me to my very core. Come on guys, this is easy!