I‘ve been procrastinating all week on my costume; we need a name for the Fall Sewing Lazies. I gave myself a kick in the butt today and I’m finally going to put a dent in the somewhat overwhelming workload I’ve made for myself, but in the meantime, some more costumes from years past. 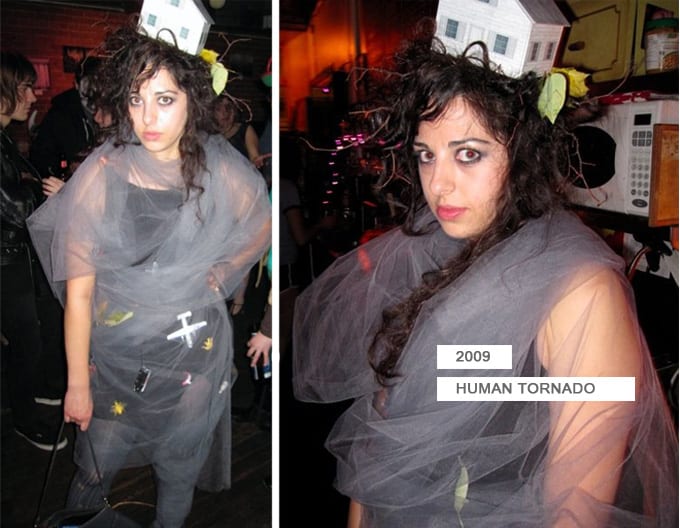 Oh human tornado costume… how I loved you. I had just seen The September Issue and was so inspired by Grace Coddington I decided to go high concept for ‘Ween ’09. I shredded some grey tights and wrapped an old black dress in yards of grey tulle and suspended farm animals, toy cars, airplanes and little plastic people to string. When I spun around it looked like they were caught in a twister. I made a tiny farmhouse fascinator that was modeled after Dorothy’s home in The Wizard of Oz, and stuck leaves and sticks in my hair, which I had ragrolled and teased to high heaven. A couple of pounds of smoky eye make-up later, and I was a walking natural disaster (I got Method that year and got quite tipsy, which made me a human disaster by the end of the night).

I am still bitter about losing the costume competition to a girl who went as the Cathy comic. She wore an 80’s sweater and held an “Ack” sign. So I stepped up my game the next year…. 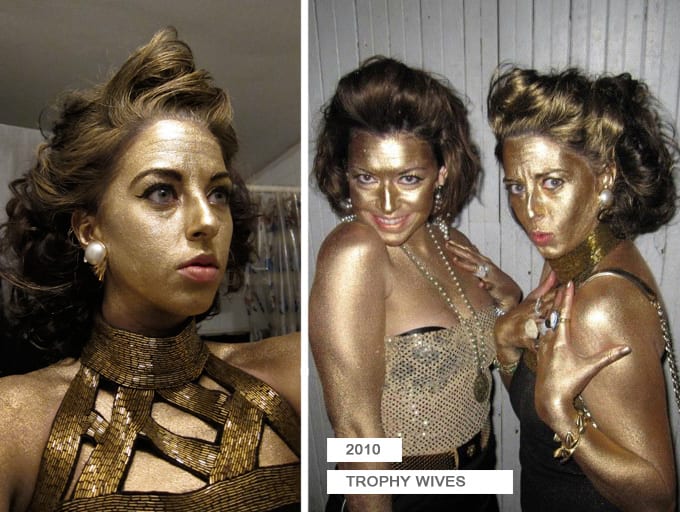 Yes, I covered most of my skin in gold body paint (which incidentally I was still digging out of my ears 2 weeks later….) My girlfirend Laura and I decided to go as Sopranos style trophy wives. I bought a crazy Jersey Shore sequinned dress, teased and curled my hair to within an inch of its life, sprayed a can of gold spray on it and spent over an hour coating sketchy gold body paint over any visible skin. We loaded up on cheesy jewellry and left weird gold schmears on everything we touched. I actually ended up meeting a future boyfriend that night. He was dressed as David Bowie from Labrynth; it was love at first costume sight.

Next week I will share my (three!) costumes from last year.

As some of you know, I am giving away a Victory pattern to whoever manages to guess my costume this year.

Hint #2: I’ve had to purchase 8 yards of organza, 3 yards of tulle, craft glue, rhinestones, pearls and 80 pound fishing line. Make of that what you will.