close
Hola amigas. I have only just returned from a week in Cuba with 3 of my best bros. We stayed in an all-inclusive resort on the island of Cayo Coco just off the coast. Normally I’m not an all-inclusive kind of lady. I prefer street food, random adventures and wandering when I’m lucky enough to go anywhere, but Cuba happens to be insanely cheap in the off season and I couldn’t resist a week of sun, beer and bonding with my guy friends.

Unfortunately we didn’t make it to the mainland so I didn’t really see Cuba as much as stay in a strange fantasy land of endless pina coladas, sunburned tourists and really staggeringly terrible food. Foodies on vacation are a dangerous breed, especially in a country still suffering from a restrictive, and in my opinion, utterly insane embargo. Everything has to be imported – produce was minimal, quality was non-existent and when it came to the buffets, everything was overcooked and under seasoned. It’s hard to complain when you know how many people there would be happy for such surplus however, but future travellers beware – hot sauce and condiments are a must-pack.

First world food complaints aside (I believe the correct term for this is “food asshole”), I am a little heartbroken we didn’t get more of a chance to see the “real” Cuba. We didn’t realize there were zero ATMs where we were staying, so the day we were supposed to rent a car and meet a local for a tour of a few nearby towns we stupidly discovered we were too broke to go!

(Skip ahead if you’re not interested in my thoughts on the history and politics of this country….)

I remain fascinated by the country and it’s warm and gracious people. Despite being a third world country, Cuba has one of the highest literacy rates in the world. Because university is free, 95% of the population has a post-secondary degree. It is illegal to not go to high school! Since Fidel Castro’s brother has taken over leadership, the economy is struggling to modernize after the terrible recession following the fall of the USSR in the early 90’s. While their monthly wage is almost negligible, the government provides everyone with an education, enough food to eat, a place to live and free health care. However, they remain greatly impoverished largely due to the embargo by the US, as well as politically repressed due to the dictatorship. The tourist industry provides the best income for Cubans – despite officially having “one social class”, the lawyers and doctors serving drinks in resorts make much, much more in tips and gifts than it is possible to make otherwise. Coming from a thriving capitalist country, and a city in the throws of political unrest due to tuition increases by the provincial government, it was a fascinating glimpse into a world that works very differently. For many people in Canada and the US, the Cuban reality would be a blessing (food to eat, a roof over your head, etc.) Needless to say, I felt grateful to be home, grateful to eat wonderful, varied food, grateful for my internet and and sewing machine.

THAT ASIDE…. Hot and humid every day, the only thing to do was park it in the shade by the beach, read as many books as possible, snorkle, drink beer, eat burgers and wash off the sand in the crystal clear warm ocean. At night, the resort turned into a bit of a fashion show when all the tanned beauties changed from bikinis to heels and tiny dresses (despite the absolutely fearful amount of mosquitoes).

What is better for a Cuban holiday than an infinity dress? This was one of the first things I ever sewed. I made it last summer but for some reason never wore it, maybe because it feels more appropriate for hot, tropical climates where you can sip something icy while listening to sultry Cuban bands. You can wear these marvels in a hundred different ways and the light eggplant jersey I made this with was light and moved beautifully as I walked. 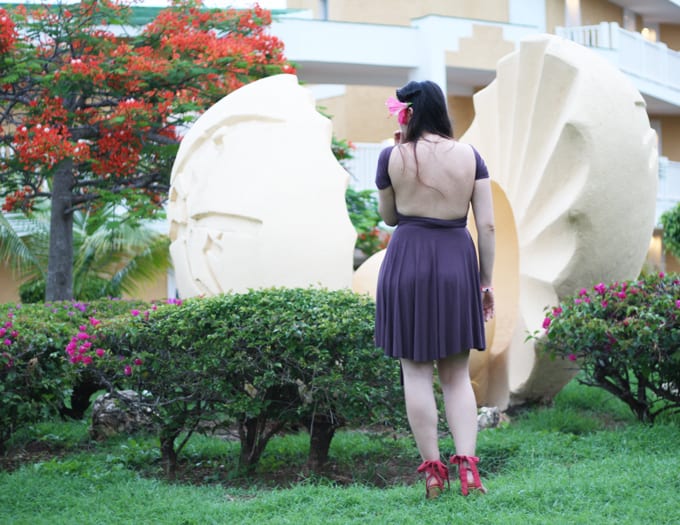 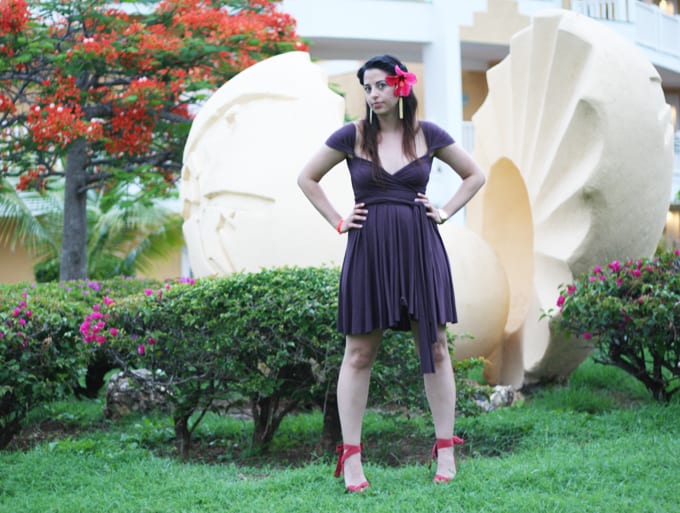 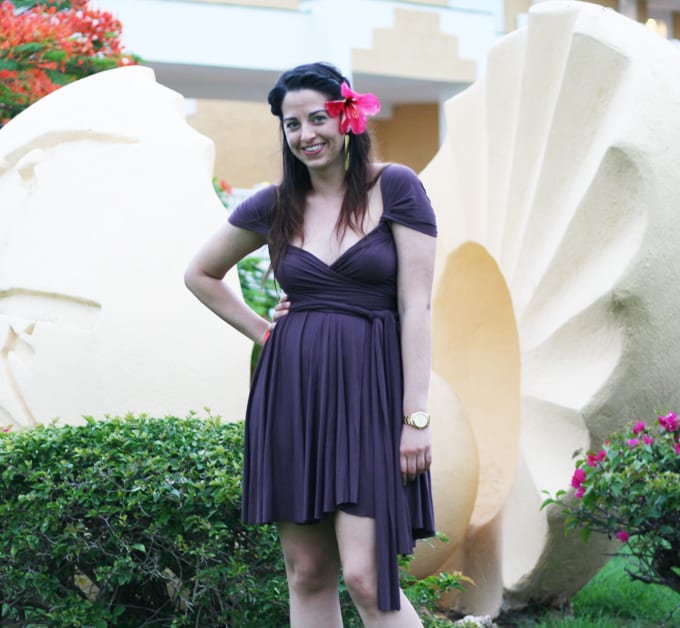 The construction of this dress couldn’t be more simple. You cut a simple circle skirt out of a stretch material, add a band at the waist and sew two very long 8-9″ strips that can then be wrapped in an endless amount of ways (hence “infinity” dress). Shouldn’t take you longer than an hour since the jersey doesn’t need to be hemmed. There is an excellent tutorial I used here to make this one. No pattern necessary! I fell in love with this dress again and am thinking about making a maxi version soon enough. if you google “infinity dress” you can see a number of beautiful examples. This company sells them for the absurd price of $158 but they have some great tutorials to explain how to tie the dress. There is a small Etsy army of women who make these to order – they seem to be very popular as bridesmaid dresses since they are so inexpensive to make and every lady can have a different “dress” based on how she ties it.

Later this week I’ll be posting the caftan I made especially for this trip. Have a wonderful weekend my friends! I seriously missed reading all your blogs while I was gone. I’ll try and spend the next few days catching up.

(Also, much thanks do my dear friend Mark Slutsky for indulging me in random photo shoots all weekend).