I‘m sure by now you’ve heard that Tasia from Sewaholic has released her first book, The Sewtionary: An A to Z Guide to 101 Sewing Techniques and Definitions

. I was so excited when I heard the news, because Tasia was one of the first people I turned to when I rediscovered sewing. Her blog is one of the best sources on the web for sewing tutorials, and I knew any book she was a part of would have the same friendly, conversational tone and professional advice we’ve come to expect.

Is there anything this woman doesn’t know about sewing? Apparently not. The Sewtionary is bursting at its spiral bound seams with everything you’d want to know about about the various sewing terms, techniques and supplies you come across when you’re starting a project. Organized in an A to Z format, it’s a comprehensive guide of sewing know-how, all illustrated with clear, step by step photographs. I especially loved that she included patterns from Grainline and Colette for use as visual examples; it’s that kind of spirit that makes me so happy to be a part of this community. We’re all in this together! 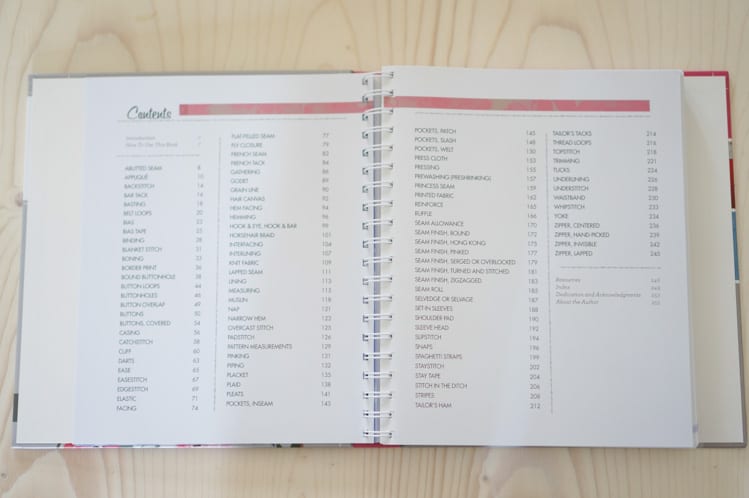 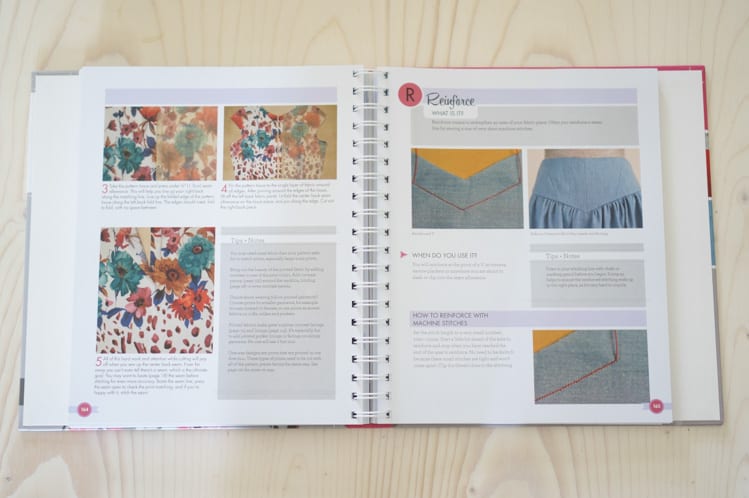 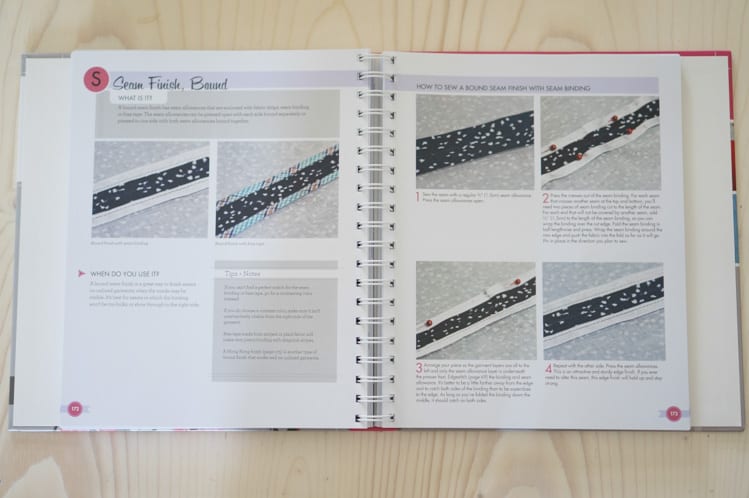 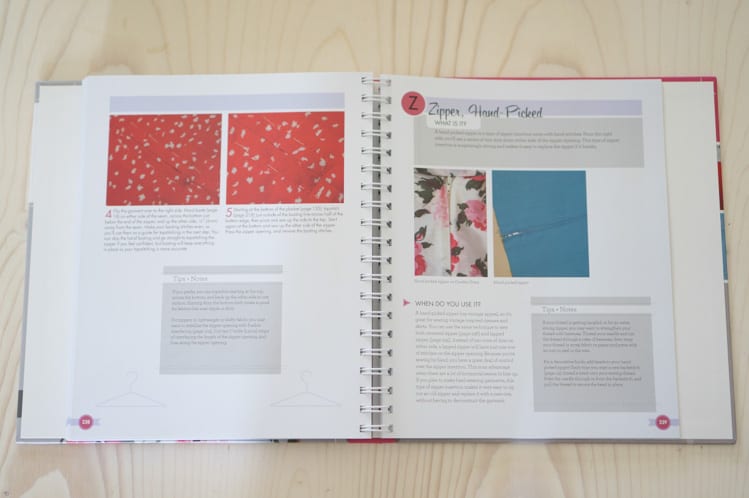 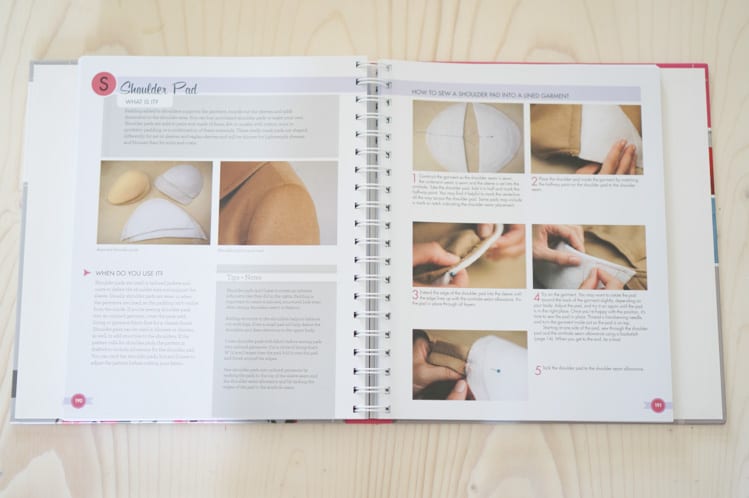 When Tasia asked me to participate in the blog tour, I immediately had a laundry list of questions for her. Thank you Tasia for telling us a little more about how this whole book thing works.

I’m sure you’ve gone over this before, but for those of us who don’t know your history, how did you get your start designing sewing patterns?

Before starting Sewaholic Patterns, I worked in the fashion industry. In 2010 I started my blog as a creative outlet since my job was more technical than creative, and was excited to see so many other people sewing and blogging! I’d started talking about fitting my body and accounting for wider hips and a smaller bust, and other people said ‘hey, I have the same problem!’ Which led me to decide I could make patterns to fit that body type. I’d only planned for my patterns to be a side project, but when I was laid off from my full-time job, I thought why not give it a try making it a full-time venture? I had that moment of making a major life decision: to either spend my savings on printing a first pattern and launching this business, or play it safe and look for a sensible job. As you can see I went for the much scarier option and I’m quite glad I did!

How did The Sewtionary come into being? Was this a concept you already had or were you approached by publishers?

I was approached by the publishers! It’s the most amazing email to get, and reminds you that you never know who’s reading your blog. They’d seen the Sewtionary page I started, with all the tutorials I’d written, and thought it would make a good book concept!

We all know what an extraordinary amount of work it is to publish a book. How on earth did you manage your company and the demands of the book at the same time?! You can be honest; you have a doppelganger, right?

I wish! To be honest it was all I did, work and write the book. I started off 2013 with the notion to keep on putting out patterns as planned but started to fall behind, and of course the book deadlines had to come first. The hardest part was keeping quiet about it, I’d started writing these ‘Behind the Scenes’ monthly posts and on top of everything else I wanted to add “…and I worked on my BOOK!” but of course I couldn’t. I kept the business running and I met all my deadlines, but everything else was on hold. I said no to pretty much every social invitation and event. It takes over your life, really! The way we did this book – with actual fabric examples and sewn samples for everything, instead of diagrams – was incredibly time-consuming but it looks so cool now that it’s done, it was worth all the time invested.

I was really impressed withe vast scope of techniques and terms you include in the book. Was it hard to reduce everything into just 101?

For sure! I think my initial list had 220. There’s just so much to say, and so many terms that relate to each other. Once you include ‘Zippers, Invisible’ you also have to include ‘Zippers, Lapped’ and ‘Zippers, Centered.’ Plus I didn’t want to make any of the entries too long and complicated. The book could have easily been three times as long, although then it would be three times as heavy and thick!

If time and money were no issue, what is your dream selfish sewing garment?

Ooh, good question! I do love sewing coats and jackets, and I don’t get as much time to really get into a heavy involved project these days. Plus a coat gets so much wear in this climate, and a well-cut coat can do so much for your overall appearance. It would definitely be a coat, hand-tailored, in some luscious thick tweed coating. I’d add all those special details like piping between the lining and facing, bound buttonholes, the perfect buttons. Now you’re making me want to plan out the perfect coat project!

Finally, any plans for another book release from Sewaholic?!

I’d like to see if this one does well first, before even thinking about writing another book! Having gone through the process once I know I could do it much better the second time around. I’d also want to have an new original idea first. There are so many sewing books in print right now that you want your work to stand out on the shelf. The Sewtionary is different as it’s not project-based and many of the books out there are, plus it’s hardcover with that great spiral binding, plus it’s alphabetical and designed to be an easy reference. So if I were to write another book, I’d have to come up with something completely new and different!

is a great book to add to your collection. I’ve picked up a few new tricks, and it’s lovely enough that you can sit down with it and read it cover to cover with a cup of tea, my number one criteria for sewing  books. Congrats Tasia, and thank you for including me in the blog tour!

More stops on the tour: