I‘m rather ashamed to admit this, but I used to have a linen hang-up. I associated it with sweaty oversized shirts worn by men on holiday vacations, and baggy wrinkled shapeless sacks worn by art teachers with statement necklaces. But something funny has happened over the last few years; linen (and wearing shapeless sack dresses with statement necklaces) has grown on me. Grown on me like an invasive ivy. Someone will have to come and hack off its tendrils in September or else its just going to take over the entire building.

It started in bed, as so many things do. I became obsessed with linen bedding. Looking at sexily rumpled linen sheets made my eyes water with longing and I ended up acquiring a linen duvet cover from Ikea that after many, many washes is one of the softest, coziest, skin pleasing things I own. Last year I started dabbling in linen clothing, making a Flora dress and Katy and Laney Tap Shorts but it was still a very casual, low maintenance habit. It wasn’t  until my linen Holly Jumpsuit that it started getting more serious, although thankfully summer ended before I could start pawning my belongings for more yardage. This year things took a turn. I bought 10 yards of gorgeous medium weight white and black linen from one of my dealers on St. Hubert and have been steadily mainlining it ever since. Thank goodness linen doesn’t leave track marks. This Lonsdale dress from Sewaholic Patterns is all about the arms. 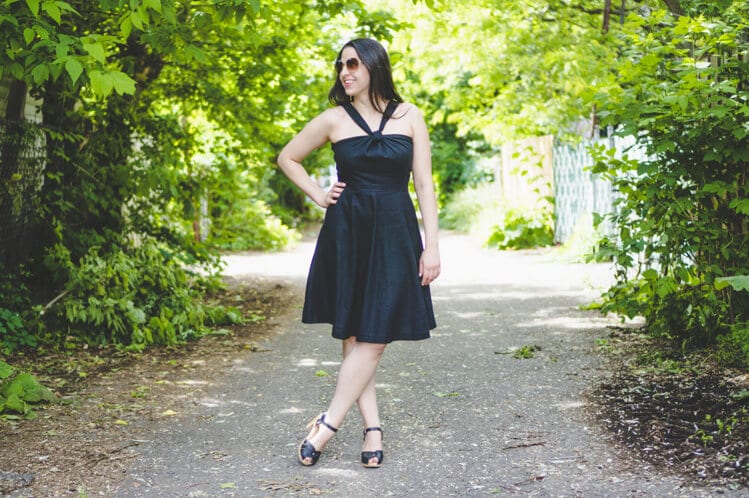 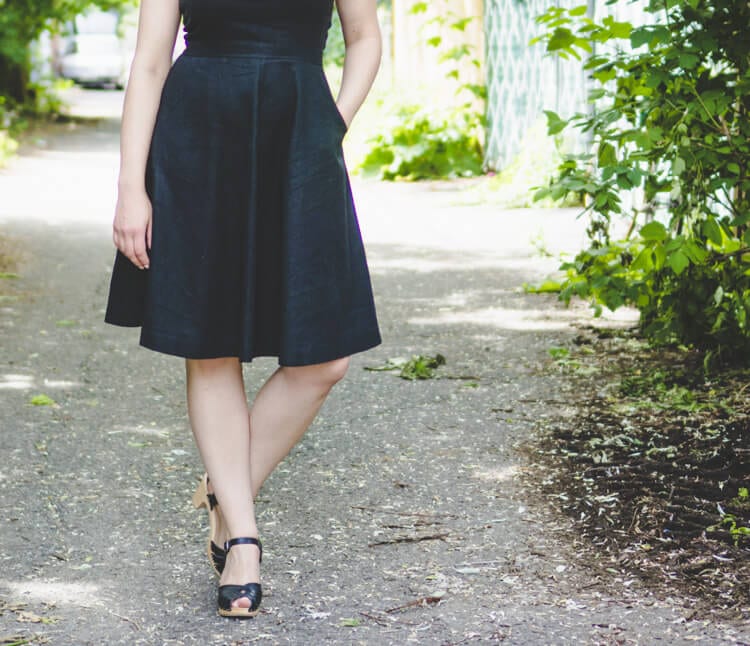 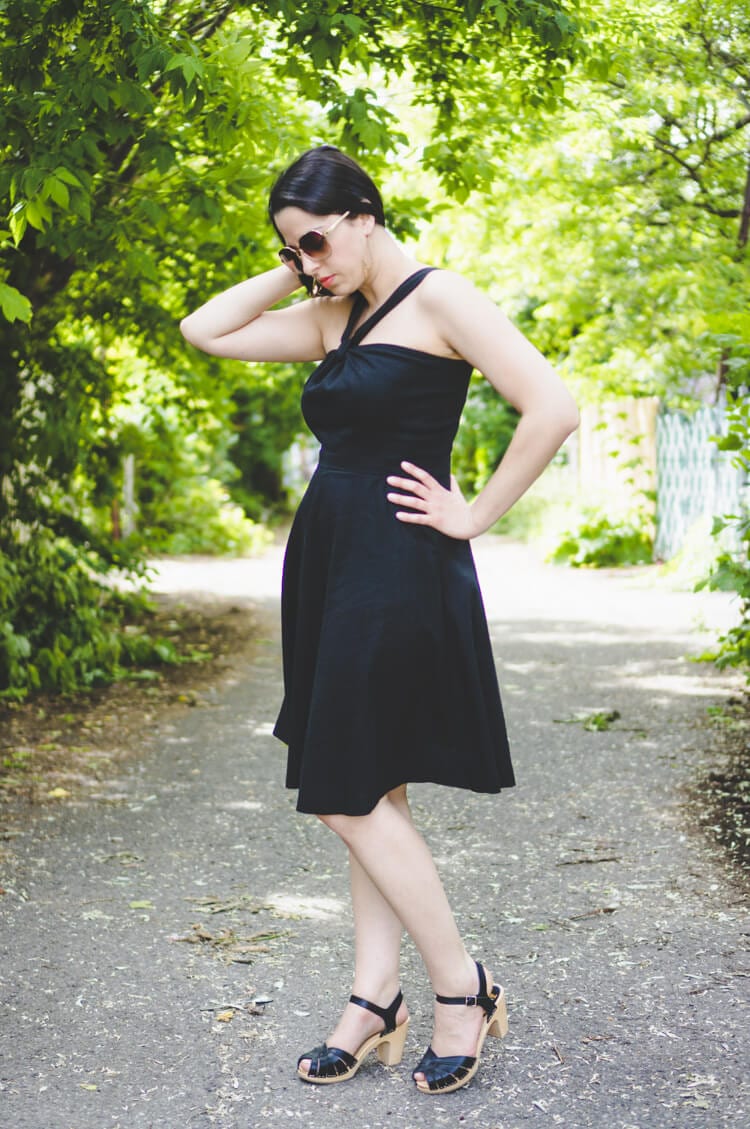 I love the Lonsdale, and made it up a few summers ago in a vintage cotton print. I unfortunately got a little overzealous when I was fitting that one and took WAY too much off the side seams, resulting in something I can only refer to as Pancake Uniboob From Hell. I love that dress but I got depressed each time I looked down and saw a board where my ladies used to be. I decided I needed to rectify the situation with a new take. My linen habit needed a fix.

This time around I made a straight size 10 and left the side seams as is.  The bodice of this pattern is unique because it’s closely fitting without darts; the shaping comes from the knot, so you really need to do a full muslin to see how it’s going to react with your chest. In my case it was totally fine, but Tasia wrote a post on doing an FBA to this pattern if you’re worried about it. The only modification I made was to shorten the bodice by 1/2″ since I found it a touch too long as drafted. I also deleted the bow at the back since I didn’t have a lot of yardage and that super long strap is a fabric hog. I intended to attach the straps to the back with concealed buttons but I didn’t leave quite enough length so they’re sewn down for now. This may be a problem once it’s washed and needs to be ironed around the bust knot, but I’ll cross that bridge when I come to it. And by cross that bridge, I mean hit with a heavy dose of steam from my gravity feed iron. 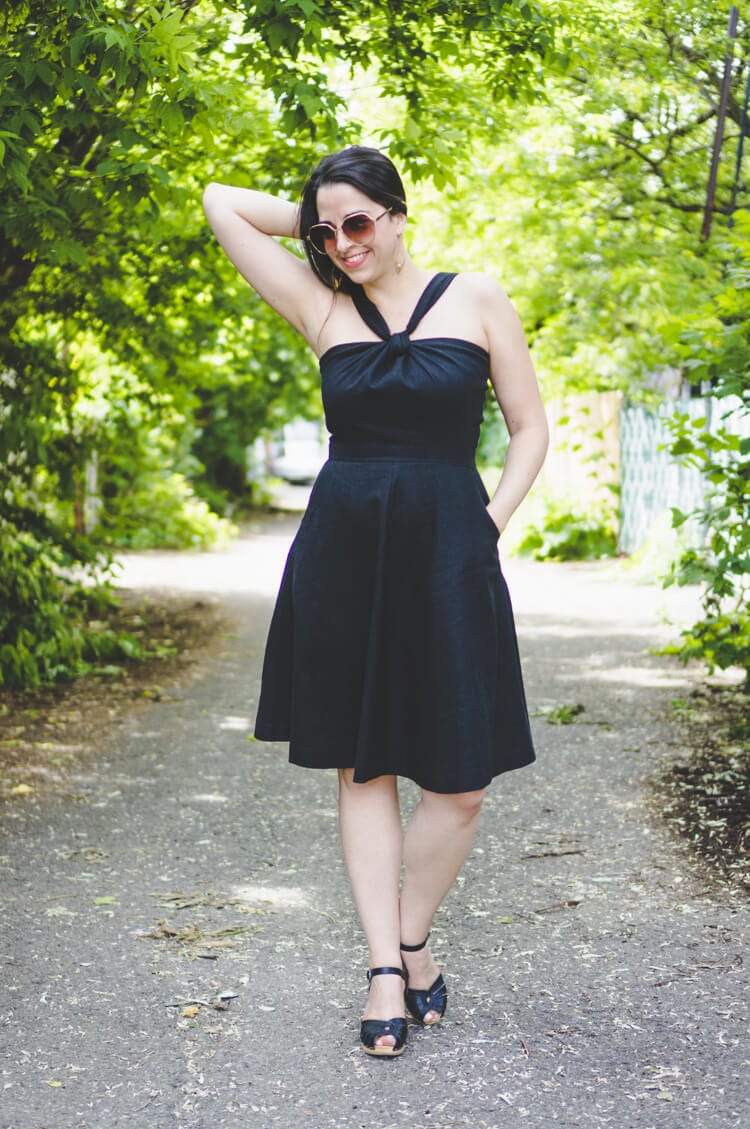 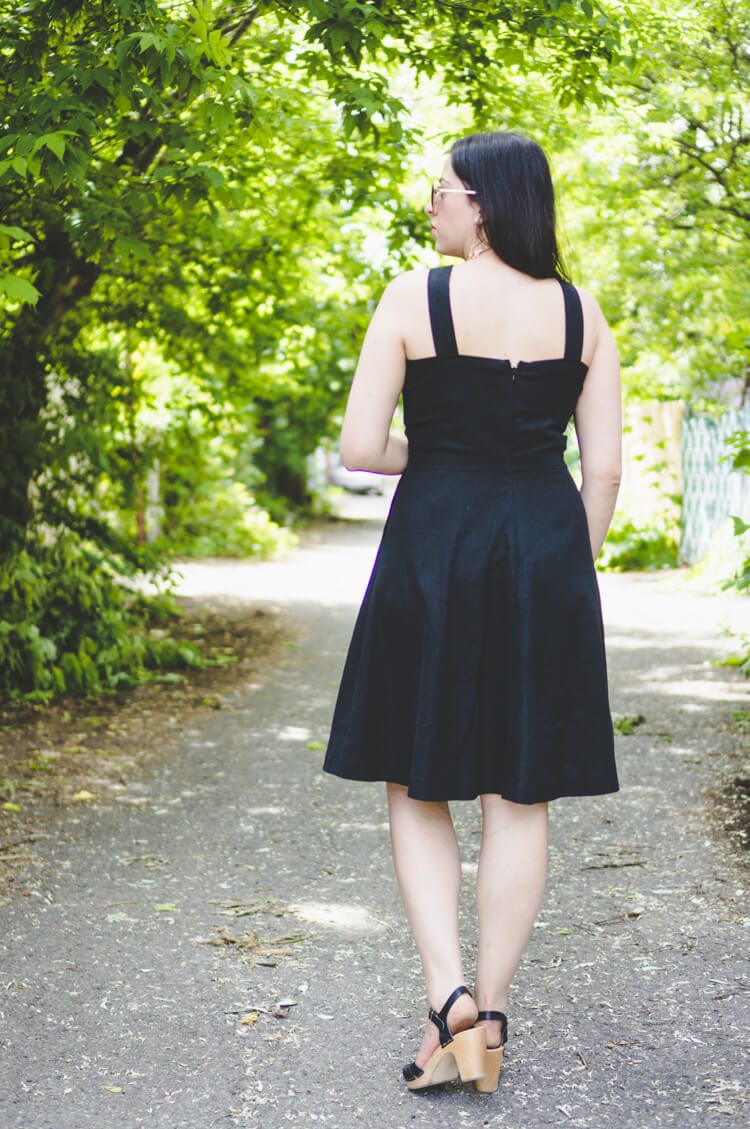 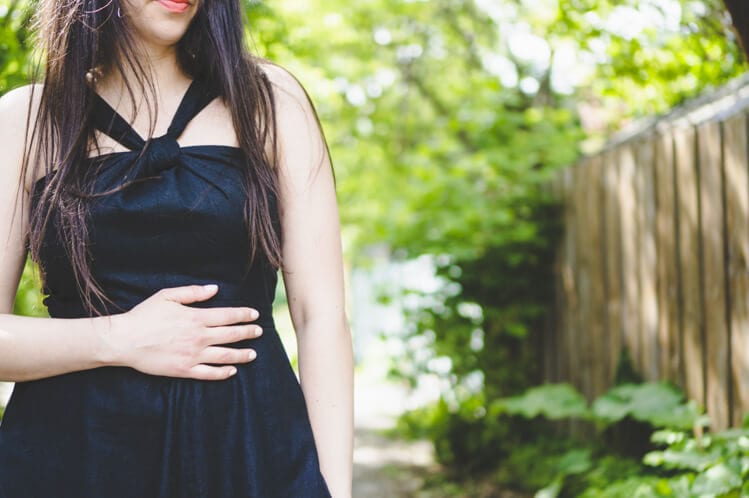 I sewed in a little hook and eye but I couldn’t reach it on my own when I was wearing it the day I took pictures, so forgive the little gap at the top of the zipper. Construction wise I used an invisible zipper and serged all my seams. I finished the hem with wine coloured lace tape I had in my stash; it’s a funny little 90’s goth detail. I also closed the waistband by stitching in the ditch from the outside rather than hand sewing it closed because #lazyseamstress. I whipped this baby up in an afternoon and basically just want to wear it to all the picnics now. 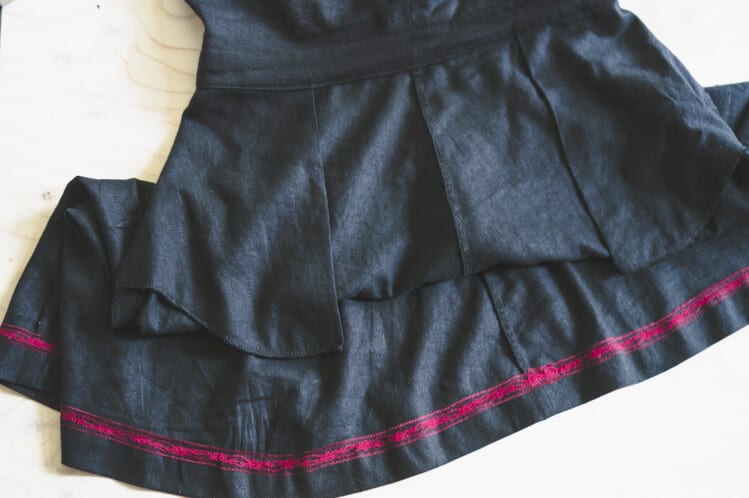 As for the rest of the black linen I scored, only scraps remain. I managed to squeeze out another dress AND an oversized 80’s croptop I need to get around to documenting. I’ll turn to the white linen next; I’m hoping it’s thick enough that I’ll be able to make at least one shapeless art teacher sack dress from it without having to wear a slip beneath. And I *may* have purchased even more linen, including a linen knit that I am VERY excited about this week, so you know, the addiction rages on.

And you? Are you as crazy for this stuff as I am? Or do all the wrinkles give your OCD a case of hives?

The Farrow Dress by Grainline Studio in Kaufman Metallic Linen