My bra game is depressing and tired right now. While I basically only wear me-made lingerie (with the exception of a few soft tank bras I bought for being loose and free around the house), almost everything is on its last legs, stretched out and decomposing in one way or another. The sad truth is that even the most carefully constructed handmade garments will fall apart on you if you wear them often enough.

I knew it was time for an update when G. saw my galaxy print number for the 10000th time, scrunched up his face and said “Is that the only bra you wear anymore?” (French honesty is an actual quantifiable thing with its own mass and volume; it should be a periodic element). It’s true that my poor Watson bras have seen better days, and have probably been in rotation a little too frequently. The fabric is not snapping back like it used to, the elastic is worn and beleaguered, and as a result, the support is just not what it once was. Nothing is sadder than sad boobs in a sad, stretched out bra. It was time to get to work. 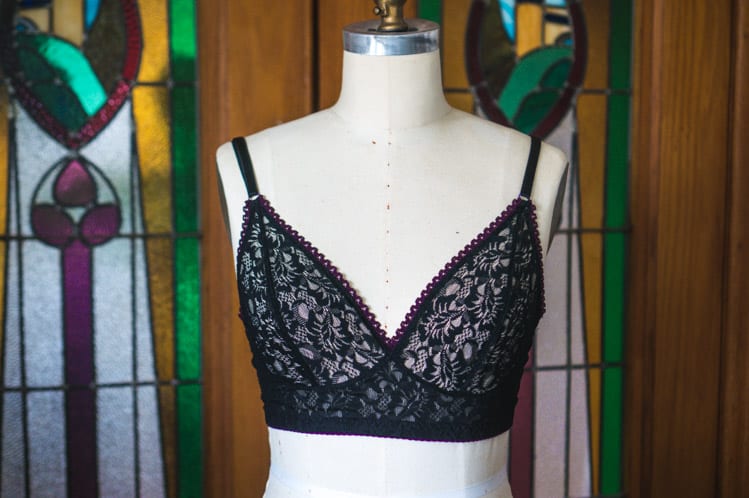 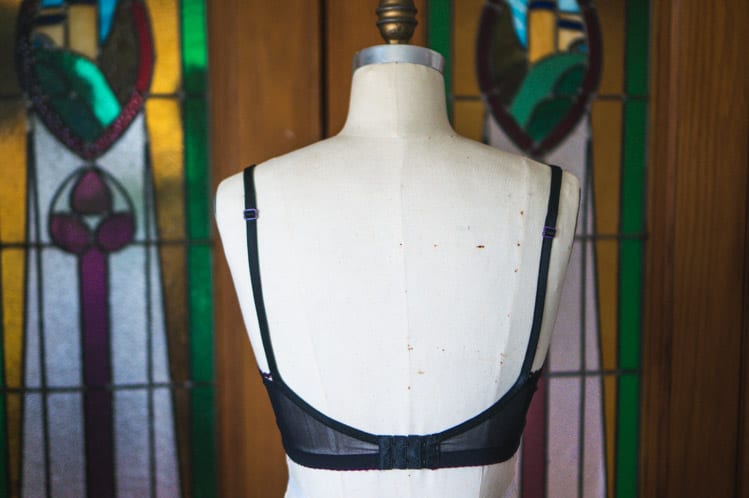 For this version I modified the pattern and shortened the band slightly, perhaps a half inch; I prefer it to end a little higher on my rib cage since it often ends up there anyway after a full day of wear. I haven’t bought any new bra making supplies in a good long while, so I dug through my lingerie box to see what I could come up with and settled on this 2-way stretch lace. Most stretch laces I’ve encountered are complete garbage and start spitting out elastic threads pretty quickly, but this stuff felt stable and well made.  I also settled on using a coordinating set of purple elastic from my stash, plastic purple sliders I had salvaged from an older bra, and some standard black strap elastic. The back band is the same power mesh I’ve used in almost every bra I’ve ever made. If the palette looks familiar it’s because it’s the direct inverse from this purple mesh and black trim version I made as an informal tester for the pattern. I’ve also made a purple and black bra here. I’m only noticing this trend now and I have no logical explanation; apparently the ladies love purple even if I don’t wear it anywhere else. 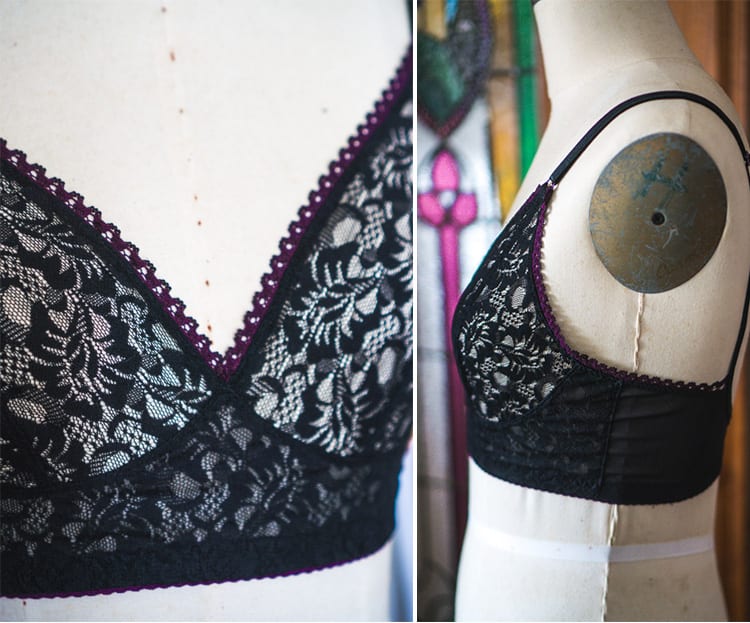 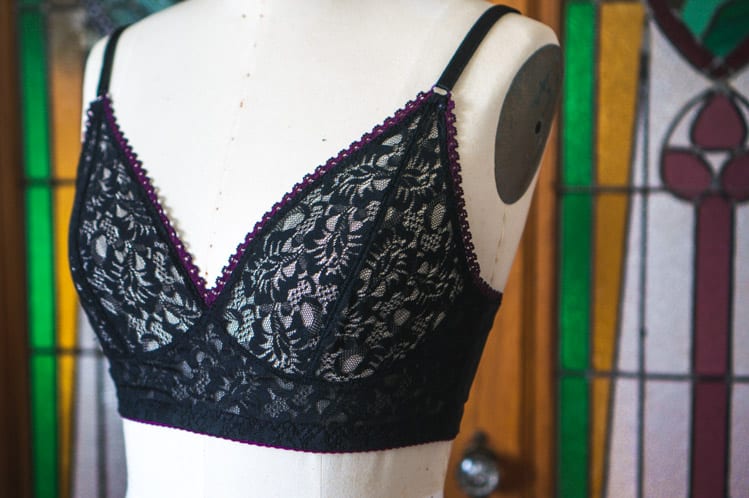 This was the first time I experimented with the 3-step zig zag stitch on my machine and I will admit, I am a complete convert. I love how stretchy and stable it is! Otherwise, construction was pretty typical; I lined the cradle with my typical lining and assembled it within a few hours.

The joys of making your own clothes: of course, this bra is MUCH too small. Because the lace only stretches in one direction, it has absolutely no give along the cradle horizontally, which means the first time I put it on I was practically in tears an hour later; the pattern clearly calls for 4-way stretch fabric for a reason. In hindsight, lengthening the band by a few centimeters would have fixed the problem, but i’ve made so many of these I just assumed it would be fine (how many times must I learn to baste fit, I will never know!) I actually LOVE the fit in the cups though – the 2 way stretch gives a lot more support, and despite the too tight band I think this is the most supportive Watson I’ve ever made.

Even though it’s a little too small, I’ve been stubbornly wearing it anyway because I think it’s flattering and sexy without being like, a super plunging push up bra (I kind of can’t believe how often I use to wear those… total natural shape convert over here. Let’s start a hashtag revolution: #thisistherealshapeofmyboobs). Unfortunately, my ribcage has taken its toll; the zig zag stitch I used on my first pass of band elastic has started to break and come undone, although that wonderful triple zig zag stitch is holding strong. 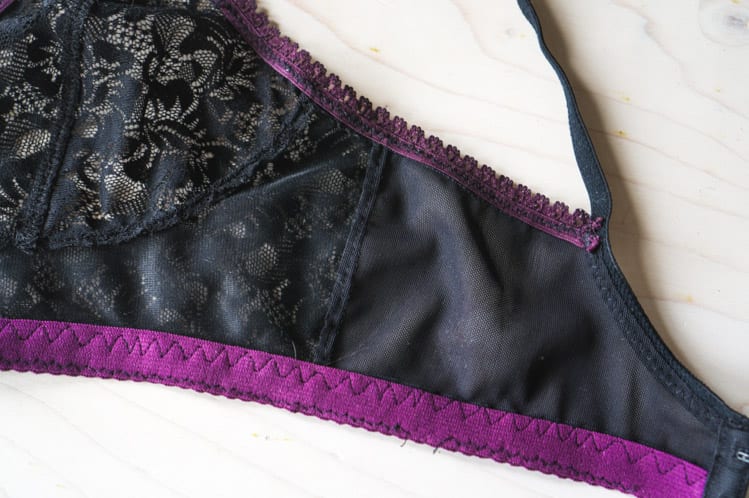 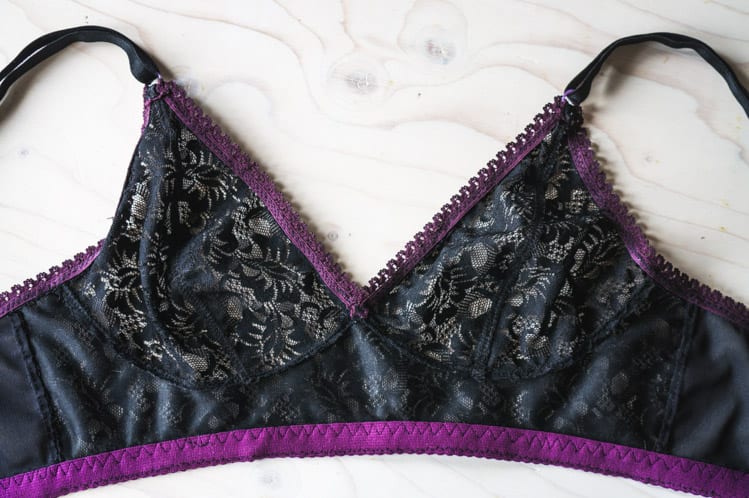 And a confession: if you’re wondering why I don’t make cute matching undies to go with any of my bras it’s because… I hate sewing underwear. Seriously. Probably my least favourite thing to make ever, for a few reasons. One: I cannot have anything resembling elastic on my cheek area or my bountiful bottom will create VPL so intense it will show through solid steel. Two: VPL from hell means I can only do stretch lace elastic finishes around the bum, which is quite possibly the most annoying, fiddly thing I’ve ever tried to sew. Every pair of handmade lace trimmed knickers I’ve ever made has completely fallen apart. It’s incredibly dispiriting. So, I basically just stick to tried and true lady part friendly modal undies from Soma, which never match my handmade bras but are comfy as hell. Hot tip: if you have a big butt, Embraceable undies from Soma are the absolute best. PSA out.

Underwear aside, I’ve definitely caught the lingerie bug again and have been keeping my eyes peeled for fun new bra fabrics, along with over-populating my Pinterest lingerie board with daily doses of underneath-it-all-goodness. Have you been making bras lately? Anyone else hate sewing underwear? Any advice to get me back on the horse?