HAPPY NEW YEAR LOVERS! I hope you had a magnificent holiday and managed to sidestep the terrible plague that took over my soul, lungs and sinuses these last few weeks. I’m back in the saddle and raring to ride 2015 like a magical flying pony across the sky. Right after I deal with the end of year accounting I am writing this post to avoid doing (my bookkeeper doesn’t start until February and until then I will be fabricating all manner of “urgent” tasks to avoid the loathed spreadsheet).

I have a few backlogged projects to talk about this month. First up are my second and third Watson bras (I made my first version in sheer purple mesh). I am growing pretty obsessed with this pattern. It can be a struggle to get properly dressed every morning, and putting on a structured under-wired bra just to sit at my computer all day makes me feel like this:

(Thank you Paul Rudd in Wet Hot American Summer. For everything.)

So yes, Watson is verrry comfortable, especially after I realized I was sewing my bust elastic in way too tight. It really only needs the very lightest stretch, so be mindful of that if you make it, lest you want permanent elastic indentations under your boobs. I actually ripped out the elastic from my first make to give myself a little more room and have been wearing that one so much I decided it was time to make another. This longline version was made from a crazy floral/galaxy swimsuit lycra I’ve had in my stash forever. 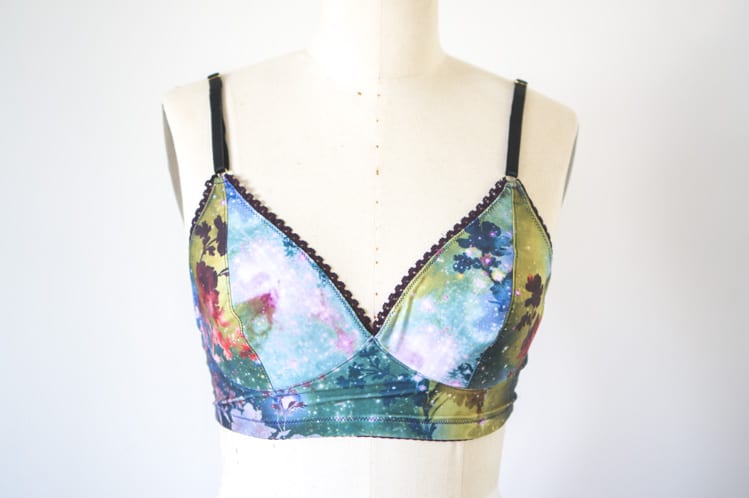 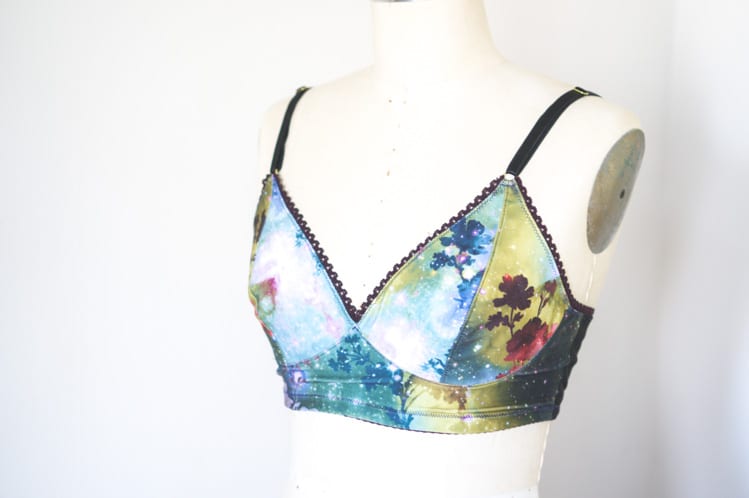 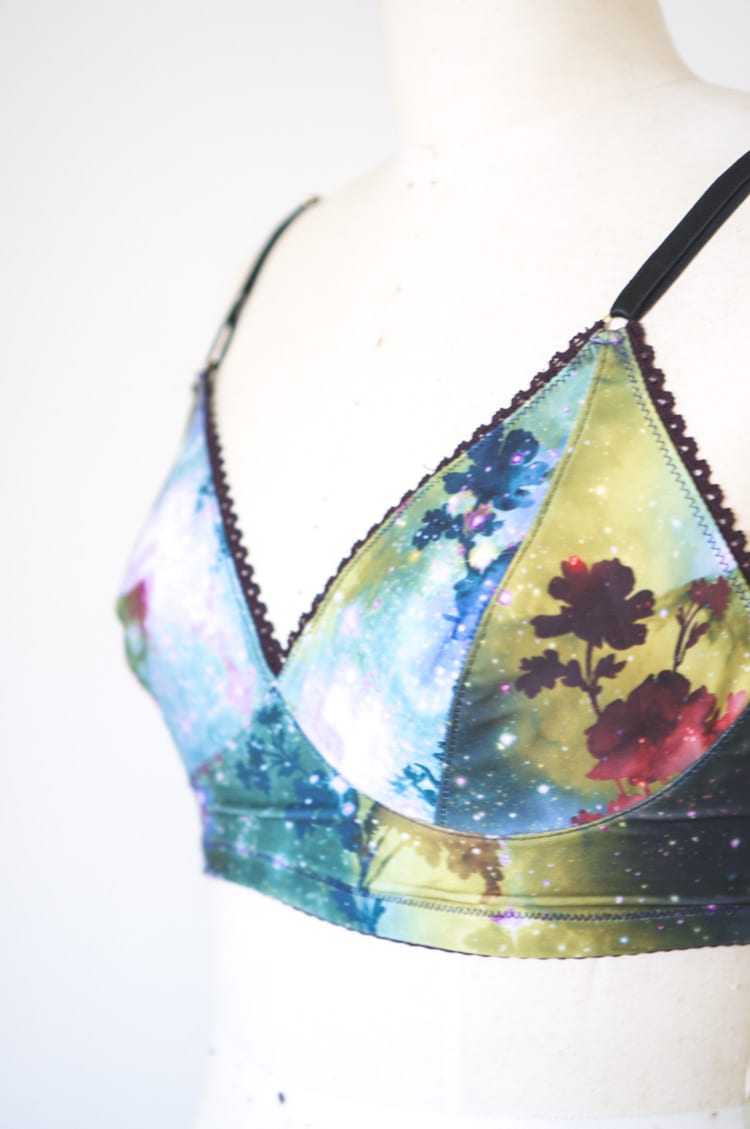 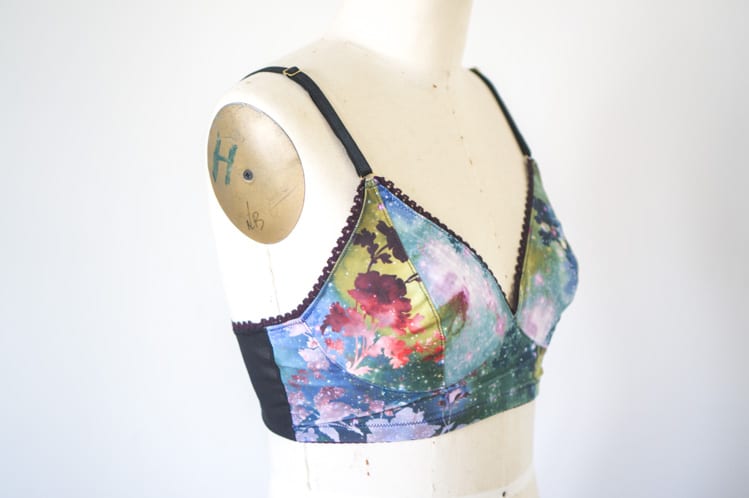 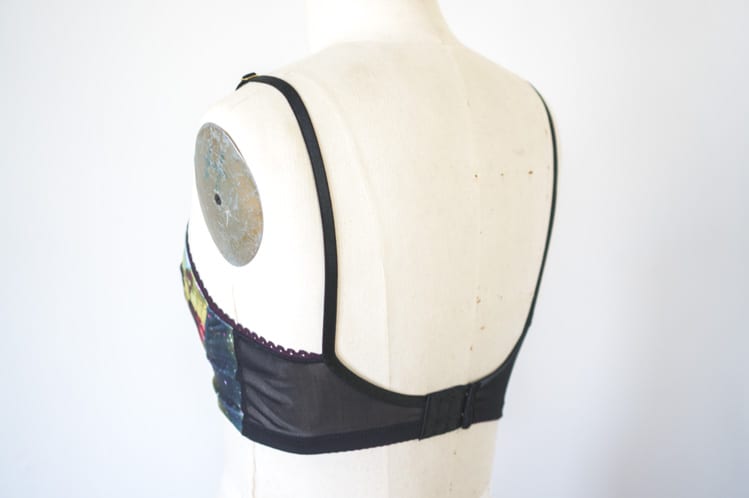 I used lovely plum elastic I found at one of my local notion stores, along with some black strap elastic and gold metal sliders, with black powermesh for the band. I also lengthened the back band by about 1cm for maximum comfort. As you can see, I ran into some issues with the cradle lining. The lycra is VERY stretchy and slippery, and sewing it to a more stable bra lining created the excess fabric you’re seeing under the cups. After sewing the bust elastic in the first time, I ripped it all out so I could cut the lycra a little shorter but it didn’t make much of a difference. I’ve run into this problem before when trying to line lycras – any advice for how to avoid it?

I followed the construction method Amy detailed exactly, but I am curious to try playing with some of the interior cup finishes a little more. Tasia and Caroline have done some interesting tweaks to their bras over on Sewaholic. I haven’t seen too many people post their Watson bras actually on, so in the name of science I’ll share that with you here so you can get a sense of how it looks while you’re wearing it. I am crossing my fingers I don’t see a bunch of creepy web traffic in my google search terms a month from now. Best to avoid words like “nipple”, “busty” or “space boobs”. Oh no, now I’ve done it…. 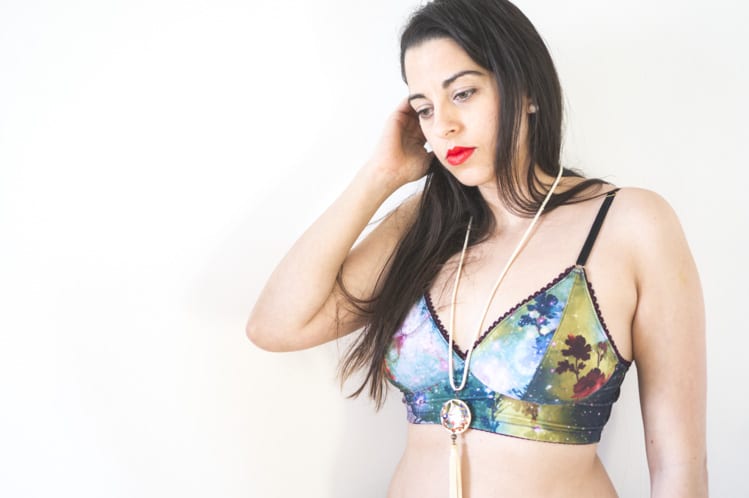 As you can see, there is quite a lot of coverage, at least for me, and the cups sit perfectly under my bust. Since the fit is fairly modest, I think it would be a great choice to wear under loose tanks in the summer.

I also got around to making the shorter bralette version and used this weird silver lame 2-way stretch fabric I had in my stash. I made one of my earliest bras in this stuff but that make had a lot of construction issues, so I was happy to give this fabric another go. The pattern calls for 4-way stretch, but I think it actually worked pretty well. I don’t think it has terrific recovery so we’ll see how long it holds it’s shape. 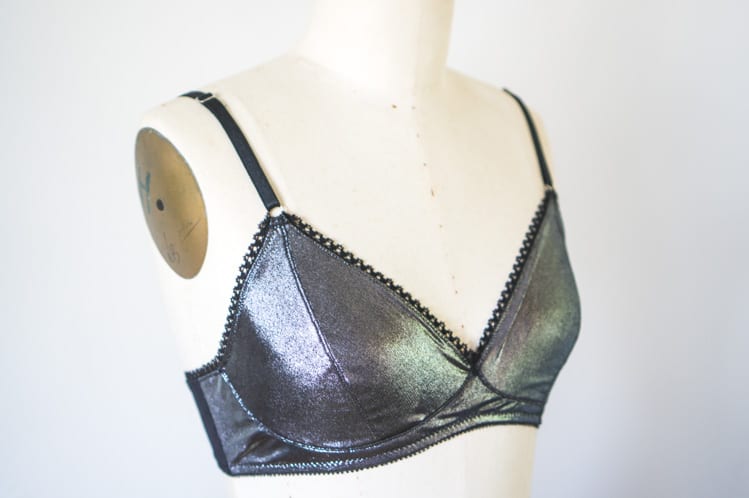 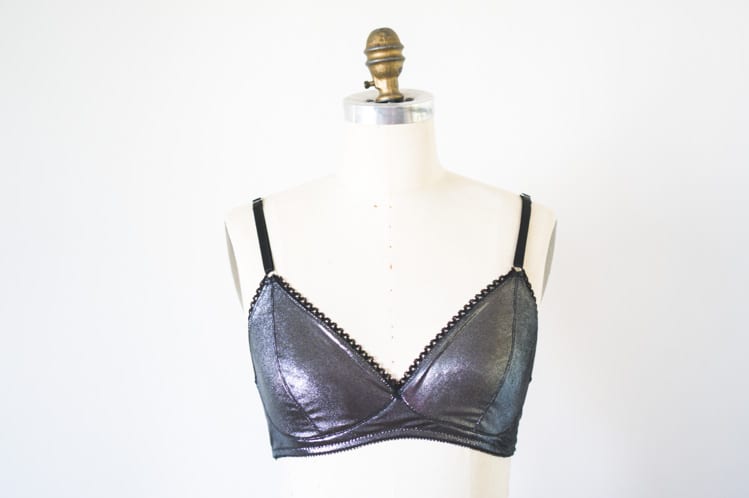 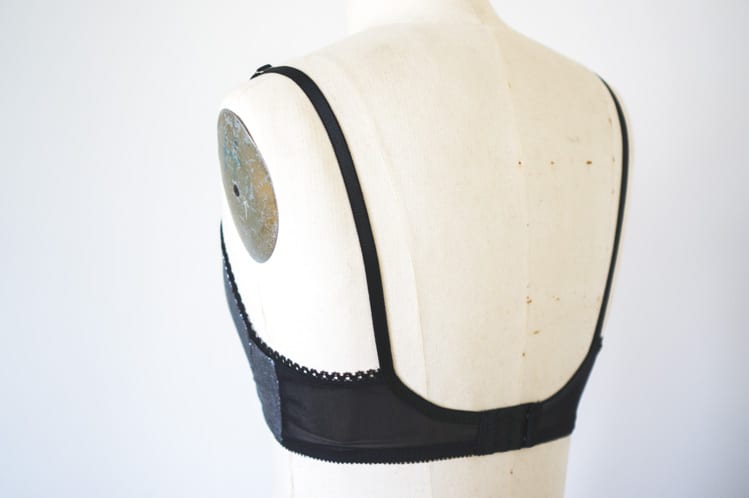 I used the same cup elastic, this time in black, but switched to silver hardware. Because the cradle is shorter, this bra doesn’t have as much support but since I’m not a really busty lady (*cue creepy Google search terms*) it’s fine for me to wear this day to day. It’s SUPREMELY comfortable. In fact, these are the only bras I brought with me when I went home for the holidays, because no one wants to deal with digging under-wires when one is stuffing one’s face with pierogies, turkey and chip dip.

So thank you Amy. I am officially off under-wired bras right now and am dreaming up more versions of the Watson. I think I’d like to make a nude “t-shirt” longline to wear under white teas, since my RTW padded nude bra is gasping it’s last breath.

And now I have no excuse not to get back to that accounting. Unless I decide it’s suddenly imperative to re-organize my sewing patterns…..